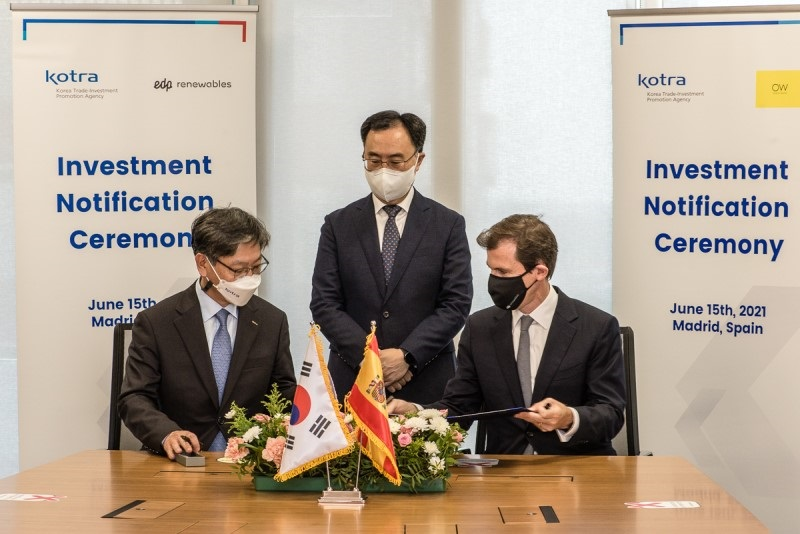 The ceremony was attended by KOTRA’s President and CEO Yu Jeoung-yeol and Trade, Industry and Energy Minister Moon Sung-wook. It was to celebrate an initial investment for Korea’s main renewable energy project, an establishment of solar and wind energy power farms.

EDPR is a global renewable energy enterprise with 12.2 GW of installed capacity in 16 countries including Europe, North America and Central America. With an initial investment of $100 million, EDRP is set to build a 200-MW solar power farm in Goheung, South Jeolla Province.

Ocean Winds was founded as a joint venture of EDPR and French company ENGIE to invest in wind energy businesses around the world, including Europe and Asia. Specialized in bottom-fixed foundations and floating platforms offshore wind farm, it plans to establish a 1.2GW offshore wind farm in Incheon. Its construction will be commenced in 2025, and completed in 2028. Meanwhile, Ocean Winds is currently also engaged in floating wind power farm in Ulsan.

The investment from global renewable energy firms will mark a turning point for development of Korea’s solar and wind power industries. Furthermore, the two global companies are planned to procure equipment and materials locally first, thereby establishing a network of local suppliers and expanding cooperation with local enterprises.

Spyridon Martinis, CDO of EDPR and CEO of Ocean Winds, said “we will contribute to the development of Korea’s renewable energy industry with our rich know-how and experiences in the wind and solar energy industry, adding “we will consider entering the global market through cooperation with Korean companies.”

KOTRA’s President and CEO Yu Jeoung-yeol said, “investment of global enterprises in Korea will contribute to revitalizing the local economy and creating new jobs,” adding that “we will provide every support to ensure success of this investment project.”