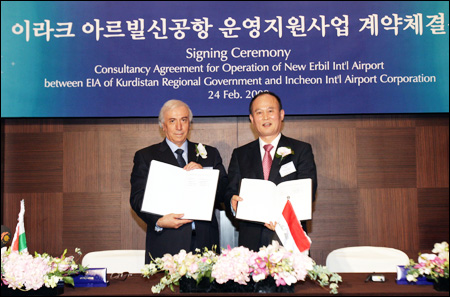 Lee Chae-wook, right, CEO of Incheon International Airport Corp. (IIAC), poses with Ashti Hawrami, minister of natural resources at the Kurdistan Regional Government in Iraq, after signing a consultancy agreement for operation of Erbil International Airport during a ceremony at the Shilla Hotel in downtown Seoul, on Feb. 24, 2009. Under the agreement, IIAC has been helping the regional government operate the airport.

It has been named the world’s best airport for the seventh straight year in a service quality survey by Airports Council International (ACI). It was rated the best airport in May among 1,700 airports around the world, according to the global airport consultation group.

Thousands of industry experts and government officials from around the world have visited Incheon airport over the past decade to learn about its construction and operation know-how.

``More than 6,300 businesspeople, bureaucrats and other professionals from across the globe have visited to benchmark Incheon airport since its opening 11 years ago,’’ said a spokesman for IIAC, which operates the nation’s main gateway. ``In 2007, we began pursuing overseas projects by turning our world class airport construction and operational expertise into a knowledge product and exporting it.’’

In February 2009, IIAC secured its first overseas project by signing a consulting service agreement with the Kurdistan Regional Government in Iraq for Erbil International Airport.

Under the deal worth $31.5 million, IIAC dispatched 25 employees specializing in six areas of information and communication, machinery and equipment, electricity, navigation equipment, rescue and firefighting to support the test operation and actual management of Iraq’s Erbil Airport. The project runs through 2014.

Erbil International Airport has been running smoothly while seeing the number of passengers almost double since its successful opening in September 2010.

The Kurdistan Regional Government also awarded IIAC another $9 million project to oversee the construction of a new airport in Kurdistan’s second largest city of Dohuk from October 2012 through September 2015.

Additionally, IIAC signed a master service agreement with Russia’s Khabarovsk Airport. Under the accord, it prepared schemes for the layout of airport facilities including demand forecast, runways, tarmac and duty free shops as well as a step-by-step construction plan.

In August 2010, the Incheon airport operator won a $1.05 million project set out by KOICA upon the request of Philippines’ Mactan Cebu International Airport.

For 12 months, IIAC sent experts in airport planning, passenger terminals, roads, traffic and navigation safety to set up a master plan for the airport. It also supported the domestic training and equipment for over 20 Philippine government and airport officials.

``Not only providing know-how on airport design and operation, we also became a global training hub for East Asian ACI member countries in 2007. We have transferred our airport construction and operational know-how through various educational programs,’’ the spokesman said.

Over 1,200 people from China, Mongolia, the Philippines and Vietnam have visited Incheon airport since 2008 to take part in 59 training courses.

``We plan to advance our initial overseas projects focusing on short-term consulting services toward a more sophisticated investment development business model that will enable continuous long-term projects,’’ he said.

IIAC also intends to gradually expand its scope of participation in projects. ``We will continue to conduct commissioned operating projects through 2012. But in 2013, we will focus on built, operate and transfer (BOT) projects, acquire overseas airports in 2014 and establish a subsidiary specializing in overseas projects in 2015,’’ the spokesman said.

All of these efforts are part of Incheon airport’s plan to build airports in various countries and turn itself into the world’s most advanced aviation hub.