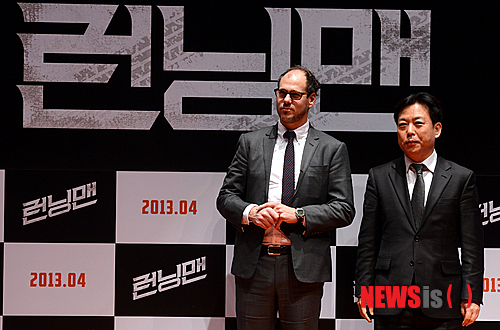 Fox International Productions (FIP), an affiliated organization of a world’s leading American entertainment group “20th Century Fox,” has invested in a Korean movie. It is an action movie named “Running Man,” which is starred by Actor Shin Ha-kyun.

On February 26, FIP President Sanford Panitch answered questions, which were related to the first main investment of this Hollywood’s major studio, at Lotte Cinema located near Konkuk University in Seoul.

President Sanford Panitch said, “We received the “Running Man” scenario after choosing the movie. The concept was interesting since running away takes place in the middle of Seoul. Besides that, the father-son relationship was well expressed in the movie. We believed that “Running Man” was appropriate for receiving our first main investment, because these two elements were properly harmonized.”

In particular, Director Kim Eui-seok of the Korea Film Council (KOFIC) had a positive influence on FIP’s investment decision. President Sanford Panitch said, “One of the main reasons why we took part in the production of this movie was KOFIC. “Running Man” was selected for KOFIC’s incentive program for international film co-production.”

Investing in Korean movies has been FIP’s long-cherished desire, and “Running Man” was the beginning of its dream. FIP has been investing, co-investing, and producing movies competitive in overseas markets. It has produced or been producing about 30 movies in 11 countries, such as Japan, Germany, Russia, Spain, India, Taiwan, Mexico, Brazil, and Sweden. FIP co-produces movies by establishing strategic partnerships with production staff, directors, and producers in target countries and actively takes lead in distributing movies created through global projects.

President Sanford Panitch said, “Korea has been a highly-prioritized market to 20th Century Fox since five years ago, when the company turned its eyes on overseas markets. Hollywood became much interested in the Korean movie industry because of the movie “OldBoy,” which was produced by Director Park Chan-wook. I was also fascinated by his masterpiece even though it was not an English movie. His movie was a catalyst to promoting Korean movies. As it is already known, we are carefully watching the movement of the Korean movie industry.”

President Sanford Panitch also emphasized, “Different from other Korean movies, “Running Man” will present a new genre and actions. We are greatly honored to participate in producing a good movie. We will actively introduce “Running Man” to Hollywood and overseas markets.”

Director Jo said, “I think that the reason why Hollywood has shown much interest in this movie is its solid storyline along with vivid actions. I guess that the movie has gained a lot of credit for its simplicity and heart-warming sincerity. In particular, FIP revealed in a scenario meeting that it wants “Running Man” to be a complete local movie. I also did not want it to be customized for American emotions or sentiments. I assume that these factors have generated a synergy effect.”

In regard to establishing a favorable ground for advancing into Hollywood through the direct investment, Actor Shin Ha-kyun modestly replied, “It is an exaggeration to say that this means entering into overseas markets on a gigantic scale.” He added, “As an actor, I always hope that many people will see my movies. It is my wish that more Korean movies are shown abroad through this opportunity.”

“Running Man” is based on a story that “Cha Jong-woo (starred by Actor Shin Ha-kyun),” who witnessed a homicide that occurred downtown in Seoul, becomes a prime murder suspect and is pursued by everyone in the nation. Lee Min-ho, Kim Sang-ho, and Jo Eun-ji also appear in the movie. Director Jo Dong-oh, who produced the Korean movie “The Restless” in 2006, has shot the film. “Running Man,” which is co-produced by Cree Pictures and FIP and distributed by 20th Century Fox, will be in theaters in April.