In a written interview with Yonhap News Agency, Maliki also hinted at running for a third term in 2014, in an apparent reversal of his previous stance that he won't seek another term.

International projects have been implemented in Iraq to rebuild the oil-rich country following an eight-year war with the U.S. that began in 2003. About US$620 billion will be spent to rebuild the country between 2012 and 2030, Maliki said.

"South Korea is a very important partner in terms of economy, and I regard Korea as a strategic partner," Maliki said. "I hope Korean firms join various reconstruction projects." Some reconstruction projects have been hampered by inadequate security, corruption and poor coordination among international agencies and local communities. 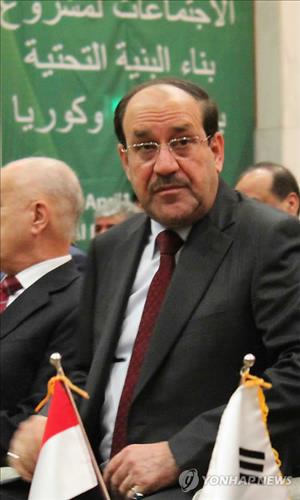 Some reconstruction projects have been hampered by inadequate security, corruption and poor coordination among international agencies and local communities.

Maliki admitted that the security situation in Iraq "still faces several challenges," but he is confident that Iraqi police and military are equipped with a "practical ability to cope with terror acts."

Asked whether he would run for a third term, Maliki replied that the issue "is up to the hands of the Iraqi people."

"Ensuring security and stability in Iraq are my important goals," Maliki said, adding he hopes to complete his government's plan to secure the stability of Iraq.

Iraq is the fourth-largest crude oil supplier to South Korea.

During the visit, South Korea asked Iraq to support a stable supply of crude oil and South Korean firms' bids to participate in oil and natural gas development projects.