South Korea will continue to promote free trade while also working to expand its own exports, the minister of commerce and trade said Wednesday.

In an exclusive interview with Yonhap News Agency, Yoon Sang-jick also vowed to promote fair trade within the country, noting unfair business practices by large companies were damaging not only smaller firms but also the country's overall economy.

"The government plans to launch an investigation within the first half of the year to see how large businesses cut prices of their suppliers and how such practices are exercised in different industrial sectors," he said.

Yoon noted it was also unfair for large companies to demand exclusive supply contracts from their vendors, and said the government will soon come up with ways to develop smaller firms into globally competitive companies. 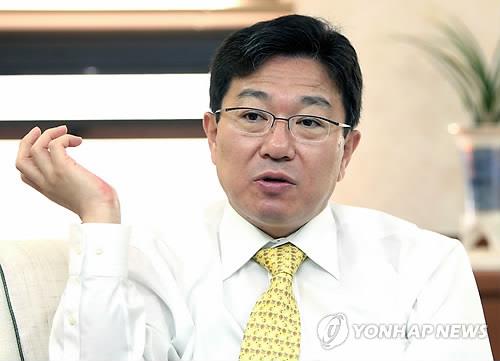 The commerce ministry recently had its name changed to the Ministry of Trade, Industry and Energy, highlighting its new task of handling the country's trade affairs, including trade negotiations which were previously handled by the foreign ministry.

Many have suspected the ministry might take a more conservative, if not a protectionist, stance on trade issues as it has traditionally worked with local companies and exporters.

Yoon said there was a need to somewhat slow down or at least reevaluate the country's ongoing negotiations for free trade agreements (FTAs) but that the country had no choice but to promote free trade.

"It is important for us to pursue an open-market trade policy as our economy depends greatly on trade," he said, noting the country's total trade volume accounted for 110 percent of its total gross domestic product in 2011.

"The ministry is now responsible for trade negotiations, but this will not mean a return to trade protectionism. It will rather lead to the creation of synergy between our industrial policies and trade policies," the minister added.

"By simultaneously pursuing a number of FTAs the country was able to expand its economic territory, but there has also been criticism that the government has failed to link the benefits from FTAs to our own businesses," Yoon said.

To help maximize benefits to local companies and also the people, the ministry will soon set up a "new trade roadmap" that will set out major trade policies and a manual for trade negotiations, he said.