(SEOUL=Yonhap News) South Korea and the United States have agreed to boost their partnership in the aerospace industry to a "considerable" level, a government ministry said Thursday, as the two sides are in related talks in Seoul. 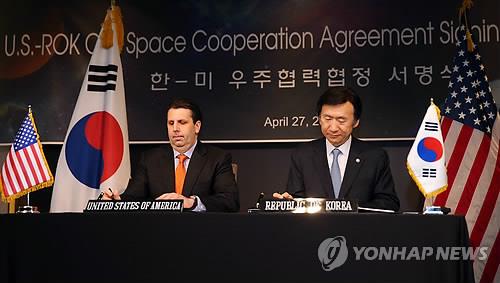 The allies opened the working-level meeting Wednesday, the second of its kind, to discuss how to deepen space cooperation.

In the first-day plenary session, they "reached a considerable level of agreement on specific ways for cooperation," according to the Ministry of Science, ICT and Future Planning.

South Korea and the U.S. decided to push for stable cooperation through accords between relevant agencies on Seoul's lunar exploration project, satellite imagery, and NASA-led space education program, called the Global Learning and Observations to Benefit the Environment (GLOBE), said the ministry.

The two countries will also continue cooperation on developing low-orbit weather satellites and explore ways for South Korea's participation in such projects as Mars exploration and the International Space Station.

The ministry, however, stopped short of providing more details.

The ongoing Civil Space Dialogue will end on Friday, with the next session scheduled to be held in Washington D.C. next year.

On Wednesday, Seoul and Washington signed a pact on promoting bilateral space cooperation.