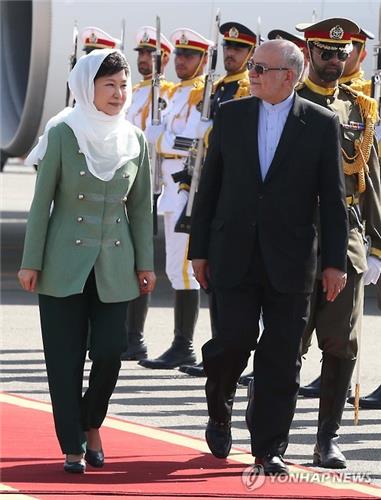 Park wore a white headscarf when she was greeted by Iranian officials at Mehrabad International Airport. She received flowers from an Iranian girl, a gesture that South Korean officials say is unprecedented for foreign leaders.

Park is set to meet with her Iranian counterpart, Hassan Rouhani, on Monday in the first meeting between the leaders of the two countries since the establishment of bilateral diplomatic relations in 1962.

"The purpose of my visit is to further promote bilateral relations in the years to come," Park said in her written interview with government-owned Iranian newspaper IRAN. "I have high hopes that it will become a starting point for more active interaction between our two countries."

The summit will set the tone for relations at a time when the Islamic Republic has emerged as a promising market following the lifting of international sanctions earlier this year.

The U.N. has lifted sanctions on Iran in a follow-up to a nuclear deal reached with the United States and five world powers over Tehran's disputed nuclear program.

Park and Rouhani are expected to discuss the situation on the Korean Peninsula and the Middle East.

South Korea hopes that North Korea will follow in the footsteps of Iran in curbing its nuclear activities and joining the international community.

"We are looking, with keen interest, into what implications the Iranian nuclear deal may have on resolving the North Korean nuclear problem," Park was quoted as saying according to the interview transcript provided by Cheong Wa Dae, South Korea's presidential office.

Still, she said, "There is a limit to how much the approach that was used to resolve Iran's case can be applied to the North Korean nuclear problem," noting that North Korea has carried out a series of nuclear tests.

North Korea has defied international pressure and sanctions over its nuclear program by viewing it as a powerful deterrent against what it claims is Washington's hostile policy towards it.

Speculation has grown that North Korea could carry out a fifth nuclear test to mark a rare congress of the ruling Workers' Party scheduled for Friday.

"It is my hope that the North will come to realize as quickly as possible that cooperation with the international community, not nuclear development, is the only way to guarantee the stability and prosperity it seeks. To this end, I look forward to working closely together with Iran," Park said in the interview.

Park is also set to meet with Iran's supreme leader Ayatollah Ali Khamenei on Monday afternoon to discuss how to boost relations between the two countries, according to South Korea's presidential office.

South Korea is pushing to participate in Iran's large-scale infrastructure development projects designed to rebuild its economy that was hampered by international sanctions.

South Korea is also seeking to expand bilateral economic cooperation to health, culture, and information and communication technology beyond construction and infrastructure.

"I believe that since Korean businesses have taken part in various projects in Iran and proven their technology and credibility, there are good prospects for expanding bilateral cooperation," Park said.

In a sign of growing interest toward Iran, more than 230 South Korean business executives and leaders accompanied the president on her visit to the Islamic Republic to explore new business opportunities.

The business delegation -- which is the largest ever -- includes Samsung Electronics and Hyundai Motor.