(SEOUL=Yonhap News) South Korea's trade with the European Union has grown 14 percent over the past five years since a bilateral free trade agreement went into effect, data showed Wednesday. 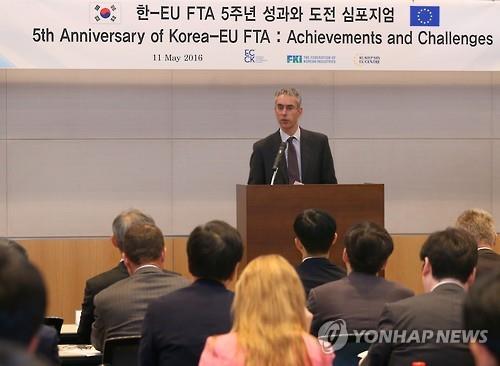 The Korea-EU trade stood at US$105.3 billion last year, up from $92.2 billion in 2010, according to the data unveiled at a symposium held by the Federation of Korean Industries.

South Korea and the EU put their bilateral free trade agreement into effect in 2011 and the symposium was held to mark its fifth anniversary with around 100 business people including those from Europe in attendance.

The increase was attributed to lowered tariff barriers under the free trade deal.

As of September last year, South Korea's EU-bound exports of products subjected to the lowered tariffs grew at a rate five times faster than those not enjoying the benefits.

Automobiles were the most popular import item from the EU. South Korea imported $6.8 billion worth of cars from the region in 2014.

Besides the expanded trade, the Korea-EU FTA also helped Korean products perform relatively better than other rivals at a time when the economy in the region had been slumping.