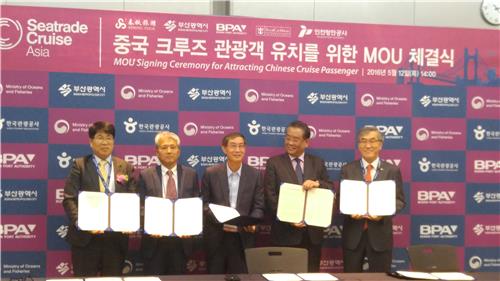 The signing ceremony took place on the sideline of the annual "Seatrade Cruise Asia" convention at the Busan Port International Passenger Terminal, which opened Thursday to stimulate discussions on the present and future of Asia's rapidly growing cruise industry.

"South Korea is one of the most popular tourist destinations in the region and Busan, in particular, is a very attractive city among tourists for its culture, foods, and hospitality," said Dr. Zinan Liu, president of the North APAC & China Region at Royal Caribbean International, one of the world's biggest cruise operators.

"We are very pleased to have a business partnership in Korea and are keen to move our cooperation further," he said during the signing ceremony.

"Asia has seen a dramatic rise in the cruise industry and China is at the center of it. The number will only keep on growing," Woo said.

The number of foreign travelers who arrived in South Korea on cruise ships totaled more than 1 million last year, with Jeju port taking the biggest portion with 619,170, followed by Busan and Incheon with 151,444 and 80,601, respectively, according to government data.

Seoul expects the number to hit 1.5 million this year, due in large part to the rise in Chinese tourists.

Industry experts who gathered at the three-day event voiced confidence in the growth potential in Asia. The region’s tourism sector, and in particular, those involving cruise ships, remains largely untapped. Last year, Asia Pacific took up just 10.4 percent of the global cruise market. Caribbean countries accounted for 39.9 percent of the total, followed by the Mediterranean region at 17.9 percent.

In the local cruise market, China is by far the largest accounting for 88.4 percent of the market.