South Korea and India together decided to upgrade the Comprehensive Economic Partnership Agreement (CEPA), a bilateral free trade agreement, in a bid to expand their economic presence in the two markets. 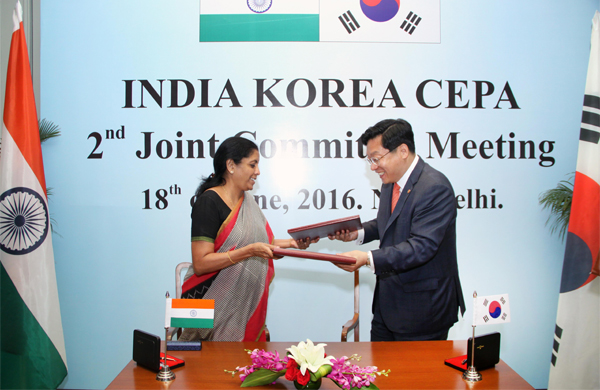 The Korea-India CEPA took effect in January 2010 but there continuously has been a need for a revision as it is accused to be not as liberalized as other free trade agreements and the rules of origin are too strict. And in May 2015 the heads of the two nations at a summit meeting agreed to commence a negotiation on upgrading the CEPA in the first half of this year.

The trade ministers of the two nations reached an agreement to hold the first negotiation meeting to improve the current Korea-India free trade agreement in August and finish the talk, possibly, by the end of next year.

Economic experts expect that Korea’s gross domestic product (GDP) would add 0.05 percent to 0.1 percent additional growth and the net benefits brought to consumers would edge up by between $600 million and $1.2 billion once the Korea-India CEPA is revamped.

India with 900 million people who are under ages of 35 and below among the total population of 1.3 billion people is a country of a large growth potential. Its GDP has grown by 7 percent every year since 2014. Korea’s export to India amounted to 12 billion won and it imported goods worth 4.2 billion won from India last year.