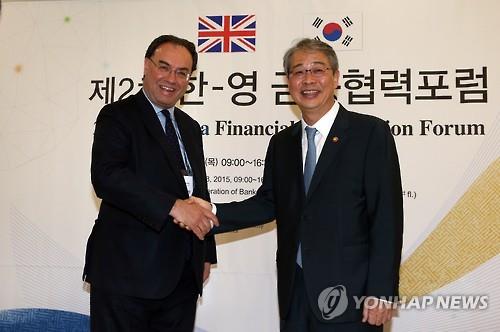 Yim Jong-yong, chairman of the Financial Services Commission (FSC), met with Andrew Bailey, head of Britain's Financial Conduct Authority (FCA), in London for an annual forum on ways to promote cooperation in the field.

It marked the third session of the bilateral consultation channel that was created in a summit deal signed during President Park Geun-hye's trip to London in 2013.

The two sides discussed the direction of financial policies and market outlook in the wake of the British vote to exit the European Union, according to the FSC.

Bailey assured Yim that there will be no change in London's longstanding status as a global financial hub, saying it's hard for any other city to "replicate" it in a short time.

Yim emphasized the need for constant close partnerships between South Korea and Britain for financial stability.

The British official also showed keen interest in South Korea's campaign to nurture the fintech industry, such as a mobile payment and robo-adviser system, intended to make financial services more efficient via technology, said the FSC.

The FSC and the FCA inked an accord to exchange fintech-related information.