The number of foreigners living in South Korea has exceeded 2 million in 2016, with Chinese nationals accounting for the majority of the total foreign population, according to the South Korean government’s report. 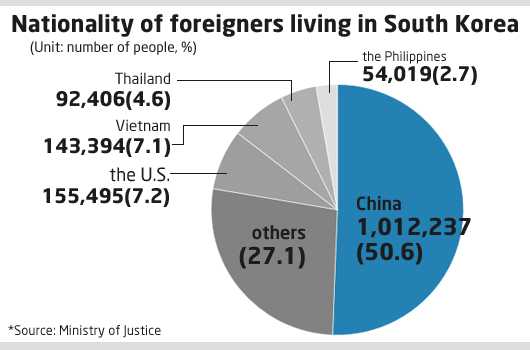 The Ministry of Justice announced on Wednesday that the number of foreigners living in Korea recorded 2,001,828 as of June 30, representing 3.9 percent of the country’s whole population. Chinese people took the lion’s share, making up more than half of all foreigners in Korea. They were followed by those from the United States, Vietnam, Thailand and the Philippines. While the number of U.S. and Japanese nationals has declined, the number of those from Thailand and Vietnam has grown.

It took nine years for the foreign population in the country to break the 2 million mark after it surpassed 1 million in 2007. The number of foreigners living in the country is expected to surpass 3 million in 2021, according to the justice ministry.

In 2000, foreigners living in Korea for more than 91 days preferred to stay in Seoul, but a majority of long-stay foreigners found home in Gyeonggi Province, areas surrounding the capital, in 2016. Gangwon Province is where the smallest number of foreigner nationals chose to live, with 18,235 people.