As a follow-up to the summit between President Park Geun-hye and her Russian counterpart Vladimir Putin in Vladivostok on Saturday, Seoul and Moscow will embark on talks to discuss a free trade agreement (FTA) between South Korea and the Russia-led Eurasian Economic Union (EAEU) on October 5, the Cheong Wa Dae said. 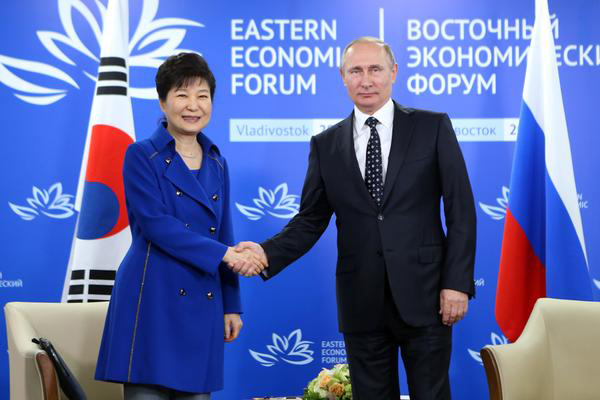 During the president’s state visit, Korea and Russia signed 24 memoranda of understanding to expand bilateral relations and joint ventures in the Far East region, including hospital projects.

“We will be able to create a new blue ocean for mutual prosperity if Russia’s rich resources and potential in the Far East region is combined with Korea’s capital and technology,” Park said right after the press conference.

“Korea is critical to Russia and a very promising partner. We are preparing to review integrating President Park’s Eurasia initiative and our Far East Plan,” Putin said.

"The two heads of state agreed to take follow-up measures for the FTA and we expect that the pact will be signed within one or two years," said Kang Seog-hoon, the senior presidential secretary for economic affairs, in a briefing.

The EAEU consists of Russia, Armenia, Belarus, Kazakhstan and Kyrgyzstan.

Meanwhile, Korea’s Gideon Systec held a ceremony to launch the pilot use of a Korean transportation card system for 750 buses in Vladivostok.