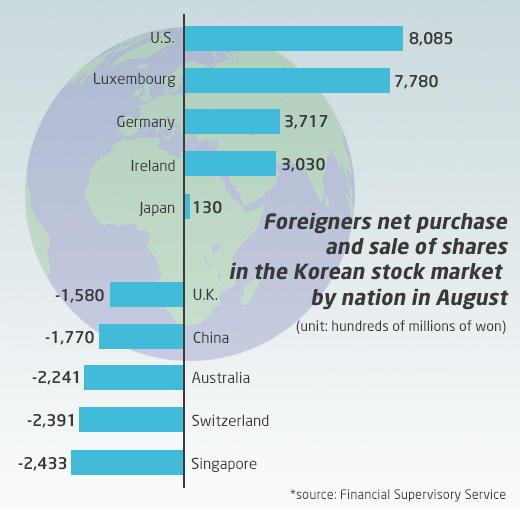 Foreign investors have kept their buying spree in the South Korean stock market. In particular, European investors have purchased shares worth more than 10 trillion won ($8.9 billion) on a net basis since March. Market observers believe that funds have been continuously flowing into emerging equity markets after Britain’s decision to leave the European Union in June.

Last month, the amount of shares held by foreigners in the Korean stock market stood at 467.6 trillion won, accounting for 30.5 percent of the total market capitalization. The share exceeded 30 percent for the first time in 15 months since 30.1 percent in May last year.

European investors have continued to buy Korean shares for the past six months. The accumulated net purchase of Korean stocks by European investors amounted to 10.03 billion won between March and August, representing 78 percent of the total net purchase by foreign investors. Experts believe that floating funds in Europe have flowed in Korea and Taiwan whose equity market is less volatile.

“The move of foreign funds including European funds depends on the timing of the increase in the U.S. base rate,” said Kang Hyun-chul, an analyst of NH Investment & Securities Co., adding, “The possible rate hike in September might make the funds flow out of the local market but, if the hike is pushed back to December, foreign investors might keep buying shares in the Korean stock market.”