GE Healthcare Korea said it will build the first APAC Fast Trak Center in Songdo in the western port city of Incheon by investing a total of US$20 million by 2020, in an effort to cultivate talent in the industry.

The company said the center is aimed at addressing the challenge of the sector in human resources which many of the leading bio players are facing. The center will help bio pharmaceutical companies improve production efficiency and reduce costs as well.

"We're delighted to open our new Fast Trak Center in South Korea that has the flourishing sector and some of the world's leading innovative biopharmaceutical companies. We are looking forward to further support the growth of the industry and provide access to latest technologies and our global competence locally," said Kieran Murphy, president and CEO of GE Healthcare's Life Science, in a press release.

"The center will be a base for R&D collaboration for biopharmaceuticals and biosimilars with local conglomerates and bio venture companies," said Song Mi-ok, a GE Healthcare official. Biosimilars refer to a biological medical product which is almost an identical copy of an original product.

The company said Songdo is already home to a number of leading South Korean biopharmaceutical companies, and excellent national and international transport links.

The Biotech Training Center, dubbed "M-Lab," will support other major local pharmaceutical firms in production and R&D, they said.

The center will act as a catalyst for the firm to join forces with local drug makers to expand their global presence in the field, the analysts said.

Udit Batra, a member of the executive board of Merck, will attend the opening ceremony and announce details of the center and the outlook of the bio industry, they said.

The company said it will officially announce the details of the center on Thursday, refusing to further comment. 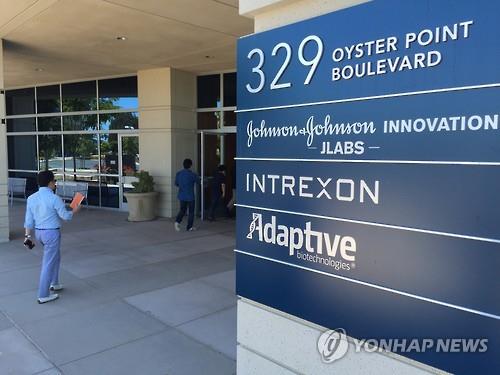 Johnson & Johnson is also reviewing South Korea as a candidate to house its biotech incubator, J LAB. The center would be the first to be established outside of the North American region, the analysts said.

The company currently has five J LABs in the United States and one in Canada, providing entrepreneurs with a shared lab space and offices as well as access to capital funding.

The facilities accommodate startups and other companies that represent a range of sectors including therapeutics, medical devices and consumer health solutions.

South Korea's bio industry has witnessed robust growth in the past few years, with the exports of biopharmaceutical products jumping 34 percent on-year in 2015.

South Korea has an ambitious target to increase pharmaceutical exports to 23 trillion won by 2020.

Earlier, South Korea rolled out a package of measures to fuel the growth of the country's biohealth industry, aiming to become a global powerhouse in the sector and add nearly 1 million new jobs.

Under the plan, South Korea aims to become a global bio-tech and medical industry hub by investing more in R&D on medicine, medical devices and cosmetics.

The government forecast that 940,000 new jobs will be created by 2020 in the industry that is widely viewed as the nation's next growth engine after IT. 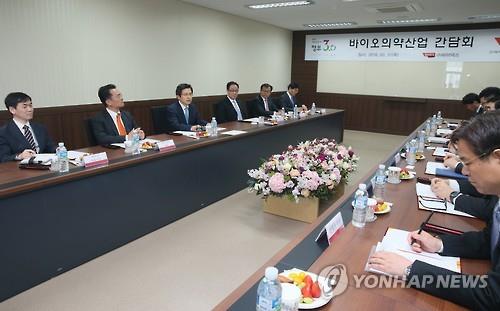 Prime Minister Hwang Kyo-ahn holds a meeting in Songdo in the western port city of Incheon on March 31, 2016, to discuss measures to boost biotech and medical industry. (Yonhap)