(SEOUL=Yonhap News) More than 20,000 healthcare professionals from both home and abroad gathered in South Korea on Friday to showcase the latest advanced medical technologies and equipment with the aim of navigating the future of the global healthcare industry that is largely seen as the next new growth engine.

"Medical Korea & K-Hospital Fair" was held at the Convention and Exhibition Center (COEX) in southern Seoul for a three-day run that included meetings between high-ranking health officials, exhibitions, conference and seminars.

The annual event was co-organized by the Korean Hospital Association that represents nearly 3,100 South Korean hospitals and the Korea Health Industry Development Institute (KHIDI) under the Ministry of Health and Welfare.

"We hope that the event will be an opportunity to expand 'medical hallyu' to the global level," Sung Jae-kyung, a ministry official said. Hallyu is a term referring to the popularity of South Korean music, TV dramas and films, but is also widely used to express the boom of local goods and services abroad. 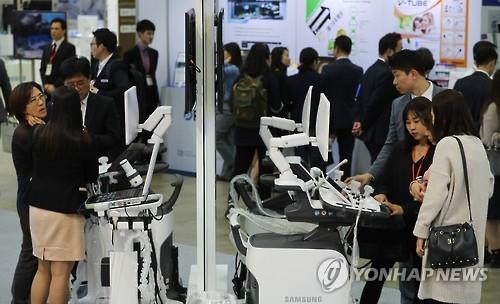 At an exhibition hall, more than 200 local healthcare companies set up booths to promote their advanced medical supplies and equipment, hoping to grab the attention of more than 80 international buyers.

U-Shin C&C Inc., a local leading company of telemedicine, showcased its latest instrument that connects doctors with patients who are physically distant through the use of information and telecommunications technology.

"Most of our models were initially developed for local purposes, such as government-run programs," said a company official. "However, we have recently signed a deal to export the products to Peru to target the global market." 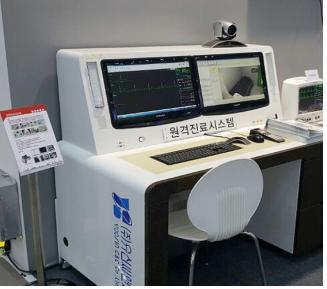 The move is part of the Seoul government's efforts to push ahead with plans to launch a nationwide telemedicine platform despite strong opposition from doctors, and to provide telemedicine services to overseas markets.

The ministry argues that telemedicine brings positive effects such as increase of medical accessibility to those who need it, efficient utilization of medical information, and enhancement of medical services quality. 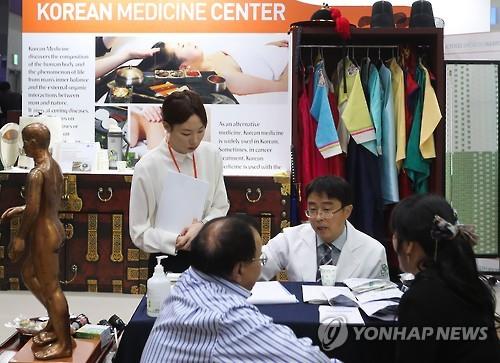 Also at the exhibition hall, nearly a dozen booths were set up to promote traditional Korean medicine which seeks to treat patients from a holistic perspective.

Licensed doctors practicing the medicine from Jaseng Hospital of Korean Medicine were present to give free consultations and advice to visitors from both home and abroad who are interested in oriental healing traditions.

Earlier, South Korea rolled out a package of measures to fuel the growth of the country's biohealth industry, aiming to become a global powerhouse in the sector and add nearly 1 million new jobs.

Under the plan, South Korea aims to become a global bio-tech and medical industry hub by investing more in research and development for medicine, medical devices and cosmetics.

The government forecast that 940,000 new jobs will be created by 2020 in the industry that is widely viewed as the nation's next growth engine after IT. 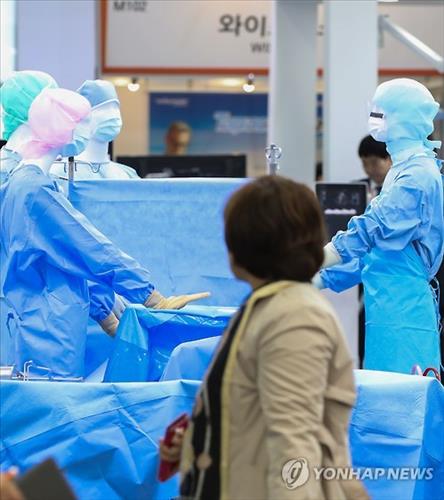 Hospitals also set up life-size operating rooms inside the exhibition hall to show the latest trends and interiors of local hospitals.

One operating room boasted zero tolerance to possible infection, armed with the latest technology that can completely sterilize both machines, such as operating supplies, and humans.

At seminars on the sidelines of the exhibition, attendees from around the world exchanged ideas about the latest trends and methods in medical technology.

"(South) Korea is geographically situated in an ideal position, allowing it to not only serve as a bridge to China, which is the world's largest market, but also as a gateway country to other Asian markets," said Jin Ki-nam, a professor at Seoul's Yonsei University.