The 5th Korea Africa Economic Cooperation (KOAFEC) gathering took place in Seoul from Monday to Thursday, with the attendance of ministers and vice ministers from 41 African countries and officials from regional institutions including the African Development Bank (AfDB), according to the Ministry of Strategy and Finance.

Starting from 2006, the biennial KOAFEC meeting is aimed at sharing South Korea's experience on economic development and enhancing cooperation in resource development.

South Korea will create a US$10 billion financial cooperation package, including the Economic Development Cooperation Fund (EDCF) launched in 1987 and aimed at helping developing countries by providing cheap loans, and the Knowledge Sharing Program (KSP), initiated in 2004 to offer its growth experience and other expertise.

South Korea's trade with African countries reached $18.2 billion in 2015, with its investment into the region totaling $146 million last year.

Its official development assistance (ODA) to the African continent rose to $332.7 million in 2014, accounting for 24 percent of the country's total contributions. 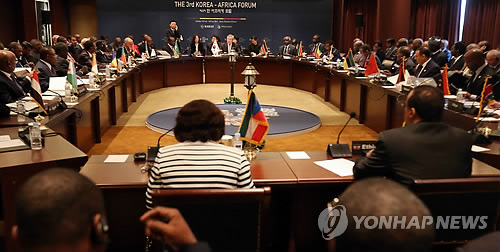