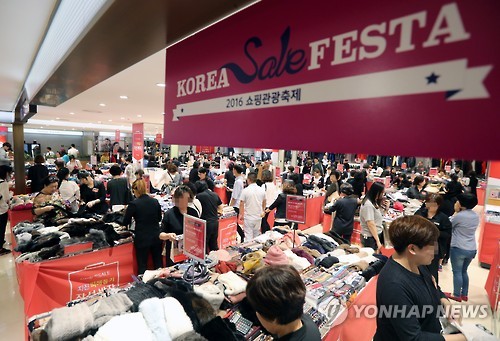 The "Korea Sale Festa," which was held from Sept. 29 through Oct. 31 to boost domestic spending and draw more foreign tourists, is also projected to have boosted the quarterly growth in private consumption expenditures by about 0.27 percentage point, said the report released by the Ministry of Trade, Industry and Energy.

It marked the second nationwide shopping festival organized by the South Korean government following the "Korea Black Friday" event in 2015.

Roughly 1.7 million foreigners visited South Korea during the one-month shopping event. It marks a 7.3 percent rise from a year earlier.

In a survey of 90 participating stores by the Small and Medium Business Administration last week, 70.5 percent said their sales increased during the shopping event period from a year earlier. The average revenue growth rate stood at 15.4 percent.

Ministry officials stressed the need for encouraging more traditional markets to join the festival next year.

Around 150 traditional markets across the nation took part in the event.

"We plan to enhance the effectiveness of the festival by expanding the number of participating traditional markets to more than 500," a ministry official said.

The government spent a total of 7.7 billion won on the "Korea Sale Festa" campaign.