(SEJONG=Yonhap News) South Korea will show off its traditional food in the United States later this week in a fair designed to promote its charm and taste worldwide, a government ministry said Thursday. 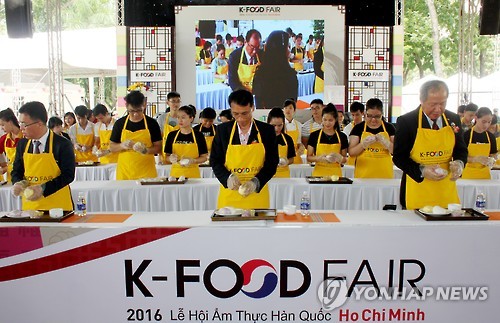 The event, titled "Together K-Food Fair 2016 in New York," will kick off Friday at 50 local supermarkets in the city and run through Nov. 20, according to the Ministry of Agriculture, Food and Rural Affairs.

During the 10-day event, an online meal kit delivery service of Korean food that provides a box of ingredients of a dish with a step-by-step recipe will be also launched for U.S. customers.

"The U.S. is South Korea's third-biggest country in terms of food exports," the ministry said. "The food fair event will help U.S. customers get familiar with Korean food and make it easier for them to experience it."

South Korea's exports of processed foodstuffs to the U.S. reached $5.85 million through October, up 13.4 percent from the same period last year, according to the latest ministry data.