(SEOUL=Yonhap News) South Korea held an IR session in Shenzhen, China, on Tuesday to promote its efforts to emerge as a regional financial hub, with a similar event due in Hanoi later this week, related authorities said.

The session was just days ahead of the launch of the so-called Shenzhen-Hong Kong Stock Connect, a stock-trading link between the two cities meant to give global investors easier access to the Chinese market.

A total of 16 senior officials from 10 local securities and asset management firms participated in it.

"This IR focused on China because Chinese financial companies have a lot of interest in entering the South Korean market while European and U.S. companies are scaling down and streamlining their overseas operations," the FSS said. 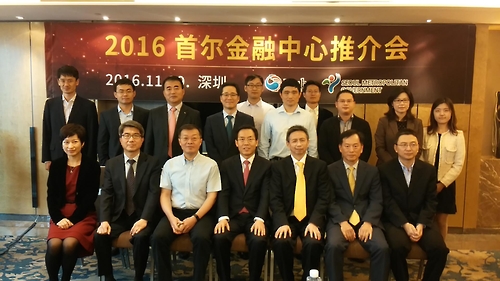 Participants in South Korea's financial market IR session in Shenzhen, China, pose for a photo, in this picture provided by the Financial Supervisory Service, on Nov. 29, 2016. (Yonhap)

In the Hanoi event to be held on Thursday and Friday, officials at the FSS and the Seoul City Government plan to visit state-owned Joint Commercial Bank for Investment and Development of Vietnam (BIDV) to request that it start businesses in Seoul.

The FSS added it also plans to visit the State Bank of Vietnam to "discuss measures to help Vietnamese financial companies make inroads into the South Korean market, and vice versa, and also bolster two countries’ cooperation in the financial sector."