The goal of the plan is to boost the local economy by securing intelligence information technologies that characterize the fourth industrial revolution, the Ministry of Science, ICT and Future Planning said.

The ministry said cutting-edge technologies such as the Internet of Things (IoT) and artificial intelligence (AI) are forecast to generate business opportunities and profits worth 560 trillion won (US$470 billion) by 2030.

"The plan is the first of its kind to prepare for the fourth industrial revolution," said ICT Minister Choi Yang-hee, emphasizing that government efforts based on a creative economy model will eventually achieve an intellectual information society centered around people.

In the technology sector, the government said it will first collect relevant data to secure the core technology to catch up with other powerhouses.

Then, the relevant technology will first be adopted in public sectors such as defense, public order and administration, officials said.

Noticeably, the government said it will focus on supporting firms in the bio industry which is viewed as the nation's next growth engine after IT. 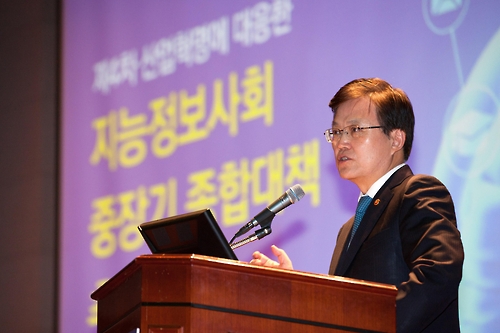