The remarks were made during a meeting between officials of the Ministry of Science, ICT and Future Planning, and executives of major tech firms that participated in the Consumer Electronics Show (CES) in Las Vegas.

"Science technologies that lead the fourth industrial revolution were confirmed at the 2017 CES," ICT Minister Choi Yang-hee said. "The ministry will expand investments into future engines of growth after reflecting this trend."

A record number of South Korean firms, such as Samsung Electronics Co. and Hyundai Motor Co., showcased a wide range of advanced technologies and products at the annual trade show. The largest Korean pavilion in the event's history, with 64 separate booths run by 55 small and medium-sized firms from the country, many of them startups, was set up.

Among the attendees at the meeting were ICT Minister Choi; Yoon Jong-rok, head of the National IT Industry Promotion Agency; and Lee Min, a Samsung Electronics executive. 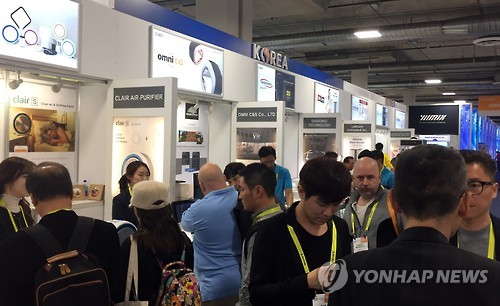 The Korean pavilion at the Consumer Electronics Show (CES) in Las Vegas on Jan. 6, 2017. (Yonhap file photo provided by KOTRA)

The participants agreed on the importance of cooperation between the government and the local firms to boost the local economy by securing intelligence information technologies that characterize the fourth industrial revolution.

The ministry said cutting-edge technologies, such as the Internet of Things (IoT) and artificial intelligence (AI), are forecast to generate business opportunities and profits worth 560 trillion won (US$470 billion) by 2030.