The World Club Dome (WCD) Korea 2017 will be held at the Munhak Sports Complex in Incheon for three days starting Sept. 22, according to MPC Partners Ltd., the organizer of the event.

WCD is an annual dance music event held in Frankfurt, Germany, hosted by the German radio station Big City Beats. The annual gathering began in 2013, attracting 150,000 each year, according to the Korean Tourism Organization.

The Incheon gathering will be WCD's first event outside of Germany. Top DJs and EDM artists, including Afrojack, Armin van Buuren, DJ Snake and Steve Aoki, will headline the event.

"Our concept is not going to every country and do a WCD. Our concept is, we want to do in Europe. We are there, we are really big, and we want a counterpart in Asia," Bernd Breiter, CEO of Big City Beats, said at a media event held at Octagon, a nightclub in southern Seoul.

Breiter added, "We are not looking for licensing (the event) in every city," and stressed that the vision was to transport the Europe-oriented EDM event to a different region.

Ahn Yang-gyu, head of MPC Partners, said his goal is to organize "the largest club in Asia."

"For three days, international artists will present various genres of EDM with over 20 stages," Ahn said.

Organizers are trying to woo hardcore EDM fans not just from Asia but also Germany and the greater Europe as well. The venue was decided for being close to Incheon International Airport to court international attendees. The Munhak complex's less restrictive regulation on noise volume, as opposed to areas in Seoul, was also a big factor.

Yeeun, former member of the now-disbanded group Wonder Girls who now goes by the pseudonym Ha:tfelt, is scheduled to put on a joint stage with German DJ Le Shuuk at WCD Korea 2017. 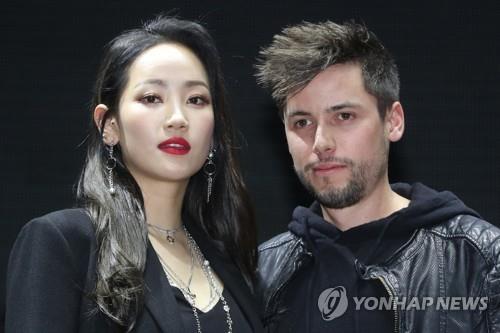 South Korean singer Ha:tfelt, also known as Yeeun, and Germany's DJ Le Shuuk pose for the camera on April 13, 2017, at a media event for the upcoming World Club Dome Korea 2017 at Octagon in southern Seoul. (Yonhap)