AmorePacific Group ascended five notches from last year to rank 7th this year, the biggest leap among top 10 names, according to WWD on Monday. It was the first time for a Korean beauty product maker to be crowned as one of the WWD top 10 global cosmetics companies.

The success of its champion brands such as Sulwhasoo, Laneige, Mamonde, Innisfree and Etude House in China and ASEAN countries has helped AmorePacific become the only Korean cosmetics company in the top 10 list. Thanks to its well-diversified overseas markets, AmorePacific Group is generating 25 percent of its total sales in Greater China Region, ASEAN and the Americas, according to company.

The company is currently seeking to expand its presence in new ASEAN markets such as Vietnam, Indonesia and the Philippines while cementing its position in the maturing ASEAN markets including Singapore, Malaysia and Thailand. Last year, the group also established an entity in Dubai and started collaboration with local distributors to tap into the Middle Eastern market with high growth potential.

LG Household & Health Care, the No. 2 player in Korea’s cosmetic industry, was placed 17th in the list. 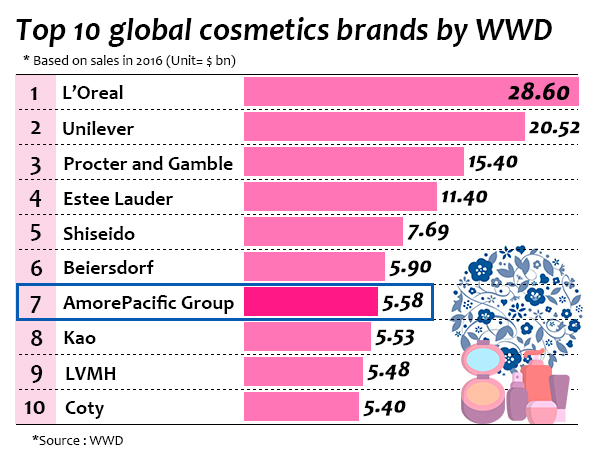