KRW 1.8 Tn to be Invested in Aviation Industry for Technological Self-reliance Over Next 5 years
Date
2017.04.24
Views
1004
According to Yonhap News,

(SEOUL=Yonhap News) The Korean government and private organizations will be making a joint investment of KRW 1.8 trillion over the next 5 years in the aviation industry to achieve technological self-reliance. 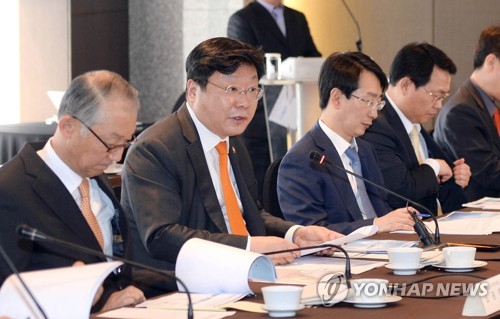 Minister Joo (second from left) presides over the Aviation Industry Development Meeting on April 19 at THE PLAZA Seoul hotel in Jung-gu.(Yonhap)

Based on the initiative, the initial stage of the investment will focus on nurturing the key aviation sectors related to aircraft engines, avionics and lightweight materials.

For avionics, investment will be concentrated on cultivating the three key areas of sensors, flight control, and navigation systems, with the aim of entering global markets.

In particular, convergence technologies, such as for making smart cabins, will be developed utilizing the country's competitive edge in information and communication technology (ICT).

Another key focus of the initiative will be applying lightweight materials in the making of aircrafts.

The plan is to secure ultra-precision technology for titanium aircraft parts, and work with local private companies that have independent development projects, so that titanium parts can be produced in Korea.

In the second half of this year, the government is scheduled to establish a government-wide Aviation Industry Technology Road Map in preparation for the 4th industrial revolution.

Minister Joo (first row, center) poses with other participants at the Aviation Industry Development Meeting on April 19 at THE PLAZA Seoul hotel in Jung-gu.(Courtesy of the Ministry of Trade, Industry and Energy)

To expand existing global markets and create new ones, global partnering sessions will be held 6 times every year for large-scale projects in Europe and the U.S.

Therefore, the government hopes to apply drone technology, such as navigation and sense-and-avoid systems, to aircrafts that transport human beings. and pioneer the global market for upgrading old aircraft models with drone technology.

To generate new drone markets, a special flight approval system needs to be introduced for flying beyond the visual rage and at nighttime, provided that safety is ensured.

To catch up with world aviation powers, Korea has to foster an ecosystem that brings together all of its strengths.

Accordingly, the government has decided to launch an aviation convergence alliance to promote cooperation between businesses in different sectors, such as aircraft manufacturing, ICT, software, materials, and research institutes.

Support will also be given to create smarter processes, and reinforce the competitiveness of small and medium enterprises specializing in aviation.

According to Minister Joo, "the government and private firms will invest KRW 1.8 trillion over the next 5 years to accomplish self-reliance in aviation technology , such as those involving engines and avionics, within the next 10 years," adding, "Korea will strive to play a leading role in the world aerospace market, and use it as a driving force to rejuvenate our economy and create jobs."