(BUSAN=Yonhap News) Korea Ship & Ocean, poised to be a financial hub for the shipping and shipbuilding industry, is scheduled to hold an opening ceremony on April 26 at the Busan International Finance Center (BIFC).

Korea Ship & Ocean serves as a tonnage bank, meaning it helps shipping and shipbuilding companies lower costs and improve financial structures by acquiring ships from the companies at market price, and leasing them back to their original owners. 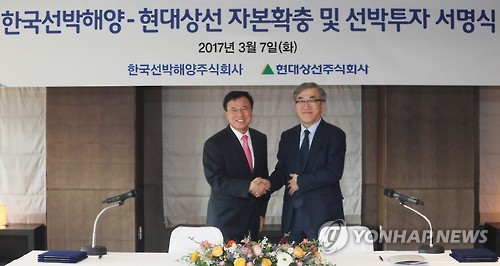 Together with the Marine Finance Center (MFC), the Korea Maritime Guarantee Insurance (KMGIC), and the Maritime Finance Department at the Korea Asset Management Corporation (KAMCO), all located inside the BIFC building, the company will serve as a one-stop financial support hub for shippers and shipbuilders.

Included in the government's Plan to Reinforce the Competitiveness of the Shipping and Shipbuilding Industries, announced last October, Korea Ship & Ocean emerged as a possible solution to the ongoing crisis in related industries.

Following efforts to persuade the national government, the city of Busan succeeded in attracting the company last January.

Korea Ship & Ocean has secured a total of KRW 1 trillion in capital--50% from Korea Development Bank, 40% from Korea Export-Import Bank, and 10% from KAMCO.

The company plans to expand its capital assets in the future, based on changes in shipowner demands.

Shipping and shipbuilding companies in the southeastern region, including Busan, expect the support offered through financial institutions will lead to the stable management of demand for ships, and thus contribute to greater stability in related industries.

The establishment of Korea Ship & Ocean in Busan, along with the decision by the new container carrier SM Shipping to open in city earlier this year, is expected to allow Busan to reclaim its position as a global hub for the shipping and shipbuilding industry.