South Korea’s largest steelmaker Posco has completed construction of the factory dedicated to producing ultra-high strength steel dubbed giga steel whose demand is rapidly growing in the auto industry because it is lighter but stronger than existing steel products.

The company held a ceremony at its steel mill in Gwangyang, South Jeolla, on Wednesday, to mark the completion of its No.7 Continuous Galvanizing Line (CGL) that is capable of galvanizing giga steel. Posco invested 255.4 billion won ($226.5 million) to build the facility that can produce 500,000 tons of 1.5 giga steel per year. 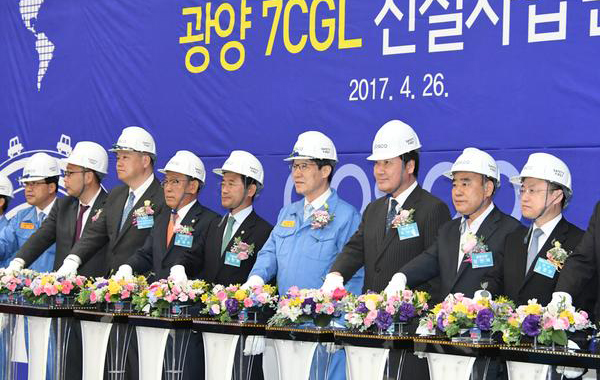 Posco Chairman and CEO Kwon Oh-joon, center, and other guests pose for a photo during the ceremony marking the completion of Posco’s No.7 CGL manufacturing facility at its steel mill in Gwangyang, South Jeolla, on Wednesday. [Photo provided by Posco]

Giga steel developed by Posco is a type of ultra-high strength steel that can withstand 100 kilograms or more weight per square millimeter. The tensile strength of giga steel - or the strength that is needed to split a steel plate apart upon pulling from two opposite sides - is 980 megapascal and above, reaching almost one gigapascal. Giga steel in size of an average palm - 10 centimeters wide and 15 centimeters long - can withstand 1,500 units of 1-ton compact cars, according to the company.

An unnamed official from Posco said that giga steel is more than three times stronger compared aluminum and has enhanced formability which in the end allows production of lighter but stronger vehicle body.

The No.7 CGL is world’s first manufacturing facility that is capable of churning out both 1.5 giga-level galva-annealed (GA) and galvanized (GI) steel sheets, the company said.

GA steel sheet boasts outstanding welding and coating capability during the galvanizing process as steel and zinc are plated in the form of alloy. GA steel sheets are preferred by Asian auto manufacturers including those in Korea and Japan while demand for GI steel sheets is high among European vehicle manufacturers as pure galva-annealed coating layer covers the entire steel plate, preventing corrosion more effectively.