It is the second such investment in Korea by the nearly 260-year-old company, following an investment worth USD 10 million to build its Korean headquarters and a directly-managed service center in the city of Yongin. 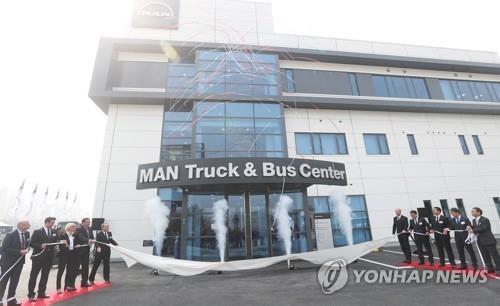 Gyeonggi Province, where both cities are located, announced that it has signed an agreement to that effect on May 2 at the company's main office in Munich, Germany. The ceremony was attended by the province's International Cooperation Officer Jo Jeong-a and President Max Burger of MAN Truck & Bus Korea.

Based on the agreement, MAN Truck & Bus will construct a PDI center at a site near the Pyeongtaek Port, to deal with a full range of activities from storing and assembling trucks to inspections and final delivery.

At the signing, President Burger said, "the company will open a MAN Training Center within the PDI Center to provide systematic education by leading world experts to business persons and service technicians," adding, "as Korea is one of MAN's 7 key strategic markets, the company plans to invest and support its business in Korea on a group level."

Established in 1758, MAN Truck & Bus is the 2nd biggest European truck maker in terms of market share (3rd in making buses), has branches in 180 countries around the world, and first entered the Korean market in 2001.

Last year, the company is known to have sold a total of 1,545 vehicles in Korea, up 36 percnt from the year before.

In May 2016, MAN Truck & Bus had signed an agreement with Gyeonggi Governor Nam Kyung-pil, who was visiting Germany at the time, to invest USD 10 million in the province, and accordingly completed construction of the company's new Korean headquarters and technical services center this March.