(HONGSEONG=Yonhap) Beijing Lirr, a Chinese maker of refractories, will build production facilities in the city of Dangjin, South Chungcheong Province, with a Korean company. 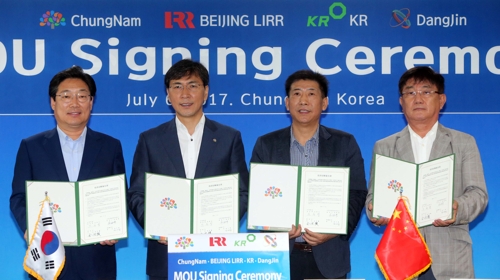 The province has welcomed the investment decision, especially in this time of conflict between Korea and China concerning the deployment of the THAAD anti-missile system.

In cooperation with KR, Beijing Lirr will build facilities to produce refractories for iron and steel until 2022 across a lot spanning 33,334 square meters in the Songsan 2nd Foreigner Investment Zone in Dangjin.

Vice President Zhang Dao Yun and CEO Kim Dae-seong promised to actively seek to contribute to regional development, including by creating local jobs, as well as honor their responsibilities to the local community.

Governor Ahn noted, "It hasn't been easy attracting investment from China since the THAAD deployment decision, but we intend to build on the agreement with Beijing Lirr and focus our administrative efforts on attracting more Chinese companies to South Chungcheong."