(SUWON=Yonhap News) Gyeonggi Province revealed July 10 that the total amount of foreign direct investment (FDI) declared during the first half of 2017 amounted to USD 1.442 billion, a 146 percent increase from the USD 586 million the same period the previous year.

Earlier this year in March, U.S.-based leading maker of specialty chemicals for semiconductors Versum Materials reported an investment worth USD 35 million in the province.

Versum Materials will build new production facilities for specialty chemicals on a 4,900-square-meter lot in the local Sihwa Industrial Complex, and intends to supply the products to global chip makers, such as Samsung Electronics, SK Hynix and Intel.

The investment will be made over the next five years, and is expected to lower the country's import dependence by KRW 18 million, and expand exports by KRW 47 billion. At Samsung Electronics and SK Hynix, next-generation memory chips made with chemicals from Versum's new facilities are predicted to create KRW 54 trillion in export revenue over a five-year period.

Foreign-invested company Eugene Superfreeze, a subsidiary of Eugene Group, declared in June its decision to spend USD 100 million on building the world's first energy-independent ultra-low-temperature logistics complex by late 2018 across 92,151 square meters of land inside the Oseong Foreign Investment Zone in Pyeongtaek.

The company plans to use cold energy from liquefied natural gas (LNG) stored in the Korea Gas Corporation (KOGAS) warehouse at Pyeongtaek Port to operate a freezer and refrigeration logistics warehouse for agro-fishery products. 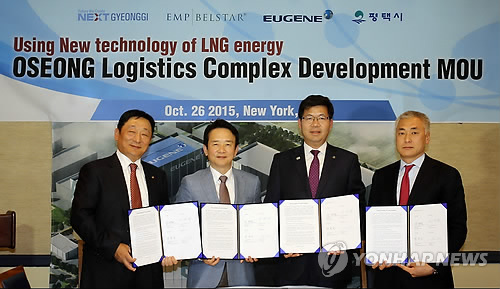 According to a province source, "although the Ministry of Trade, Industry and Energy announced that the total FDI in Korea in the first half of 2017 decreased by 9 percent from the same time last year, Gyeonggi has enjoyed an exceptional surge in FDI," adding, "foreign investors seem to consider the province an attractive investment destination because of its outstanding specialized industrial clusters such as Techno Valley, the high concentration of global companies, and trendsetters of the fourth industrial revolution."