The rate was much lower than the 61.6 percent tallied for Japan, the report said, citing data from the neighboring country's tourism authorities.

The return visitor rate decreased from 46.1 percent tallied in the previous year, while figures for Japan moved up from 58.7 percent in 2015, it said.

The number of foreigners who visited South Korea stood at 17.24 million last year, while the comparable number for Japan reached 24.03 million, the report said.

Foreign visitor numbers, which had been on a steady rise, could drop this year as the local tourism industry is struggling with the Beijing government's ban on selling Korea-bound package tours in an apparent retaliation over the deployment of a U.S. missile defense system here. Chinese nationals accounted for 46.8 percent of all tourists coming to South Korea last year.

According to the state-run tourism agency, the number of foreigners visiting South Korea in March declined 11.2 percent, in April 26.8 percent and in May 34.5 percent on-year. 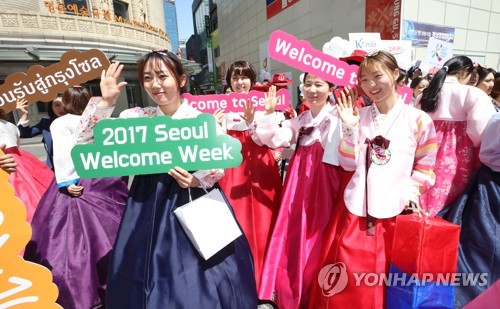 In this file photo taken on April 27, 2017, tourism officials, dressed in the traditional costume "hanbok," march through the Myeongdong shopping district in downtown Seoul to mark the 2017 Seoul Welcome Week for foreign tourists. (Yonhap)