(SEOUL=Yonhap News) This year may prove to be a key turning point for South Korea's defense industry, as the country hopes to add arms to the list of its major export items.

Korea Aerospace Industries (KAI), a local defense giant, is bidding for the U.S. Air Force's program, called T-X, to replace its aging fleet of 350 T-38 trainer jets, a deal reportedly worth US$16 billion.

KAI is seeking to supply an upgraded version of the T-50 Golden Eagle supersonic trainer jet developed in partnership with Lockheed Martin. The two firms formed a consortium for the offer of T-50A amid a fierce battle with the Boeing-Saab team.

The deal is expected to be awarded late this year, representing one of the biggest defense contracts in a decade.

"We are cautiously optimistic," a KAI official said, requesting anonymity. "In particular, our entrant has a competitive edge in price. Its performance has been already proven with more than 200 aircraft in operation." 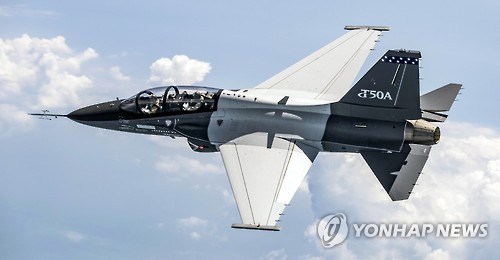 The two-seat T-50 is currently used for training pilots in South Korea. It has been exported to Indonesia, Iraq, Thailand and the Philippines.

Global experts acknowledged the excellence of the plane itself.

"The T-50 and combat versions of it (FA-50) are already doing fairly well in the world - several countries have ordered them and seem to be happy with them," Siemon Wezeman, senior researcher at Stockholm International Peace Research Institute (SIPRI), said in an email.

If it's selected, he added, it will provide a boost to KAI's push for opening more markets for the aircraft, although most of the ordered planes would be made in the U.S.

"It would show clearly that the aircraft is top-of-the-range and could open the door for orders from more countries," he said. "Especially, countries buying U.S.-made combat aircraft would look favorably on a trainer aircraft that will be made for training pilots for the combat aircraft."

Following the T-X program, the U.S. Air Force is likely to consider buying hundreds of additional trainer jets. Thailand announced earlier this week that it will purchase eight more T-50 jets for $257 million.

Botswana and Argentina are among potential export markets as well, according to the KAI official.

Not just that. South Korea's defense industry will gain fresh momentum in its ambitions to become a top global player. 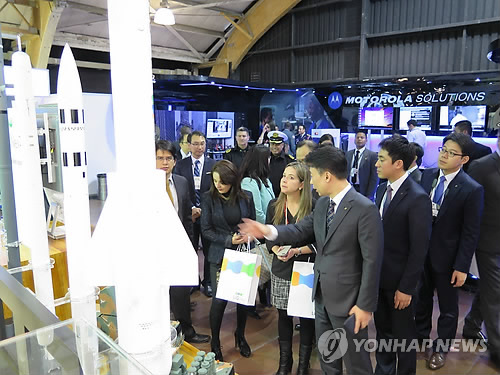 It is highly symbolic for South Korea's high-tech defense goods to make inroads into the U.S. arms market. The country's defense industry has grown largely on U.S. technology transfers and licensed production deals associated with its purchase of U.S. weapons.

Its arms production had been mainly for domestic use until several years ago. But it has emerged as a fast-growing aerospace, land and naval equipment exporter.

He pointed out that South Korea with 620,000 troops has a lot of experience in the actual operation of weapon systems.

"A package of weapons, namely hardware, know-how and software, is what Southeast Asian, Eastern European and South American countries want," he added. "In that sense, South Korea's defense industry has an advantage."

In fact, arms manufacturers here have various other homegrown products to sell abroad.

KAI is striving to sign the first export deal for its Surion multi-role helicopter within this year. Indonesia and Peru are among the potential buyers. 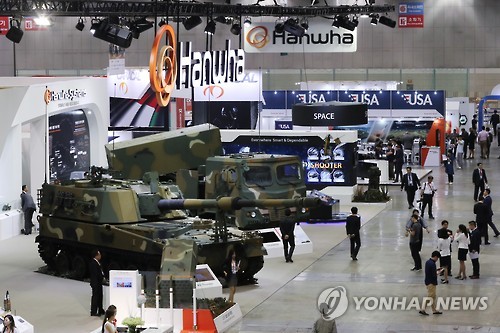 Hanwha Techwin's K-9 Thunder self-propelled 155mm howitzer is also popular. Hanwha is in final-stage talks with India for a 720-billion-won (US$623 million) contract. The howitzer has been sold to Turkey, Poland and Finland.

Hanwha is seeking to export the K-9 to Norway, Australia and Egypt.

In a show of its resolve to expand global business, the company recently appointed Bernard Champoux, formerly a three-star commander of the U.S. Eighth Army in South Korea, to lead its department dealing with U.S.-related projects. 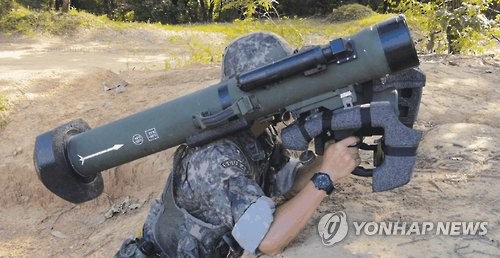 LIG Nex1, a manufacturer of guided weapons and radar equipment, is eyeing the Middle East for the export of the Raybolt (Hyungung) portable medium-range anti-tank missile and the KP-SAM (Shingung) shoulder-launched surface-to-air missile.

Daewoo Shipbuilding & Marine Engineering is building three submarines for the Indonesian military, with an order of three more possible.

Korea Institute for Industrial Economics & Trade (KIET) said South Korea's defense exports will reach as much as $12 billion in 2017 if KAI wins the T-X deal and other major export projects are successful.

For South Korea's exporters, the Donald Trump administration's campaign pledge to increase the military budget and make its global allies pay more for their own defense is good news, the think tank said in a recent report.

"Demand for weapons purchase is expected to rise in countries in Northern and Eastern Europe, the Middle East and Southeast Asia, which are South Korea's main defense export markets," it said.

Wezeman, the SIPRI researcher, pointed out the nation's arms trade faces both opportunities and challenges in the years ahead.

"The South Korean industry has managed the almost impossible: breaking through rather big in many markets with products facing strong competition from more established producers," he said. "But competition remains strong - either from countries offering similar levels of technology such as European (rivals), Israel and the U.S. and/or at lower prices like China, Russia and Ukraine." 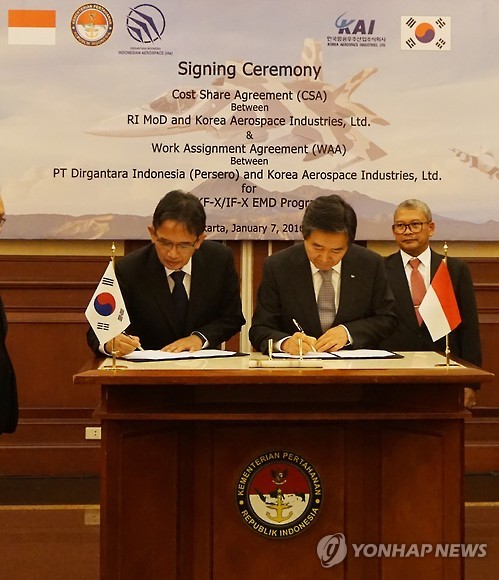 He advised South Korea to expand partnerships for the costly development of high-end military equipment, just as it has teamed up with Indonesia for the KF-X 4.5-generation fighter jet development program.

"Partners are needed to fund development, often also to provide parts of the technology, and to get an economy of scale in production," he said.