(SEOUL=Yonhap News) Marriott International Inc. will open 16 more hotels in South Korea over the next five years, its vice president said Friday, amid increasing demand from local residents as well as the steady growth of foreign visitors.

Vice President Ramesh Daryanani in charge of global sales in the Asia-Pacific region said the hotel chain operator will expand its establishments in the country's popular tourist areas, including the resort island of Jeju and the southeastern port city of Busan.

Marriott International currently runs 15 hotels in South Korea under eight luxury brands such as Sheraton and Westin. Of those, 12 are located in the capital city.

"South Korea is an important market for us," Daryanani said during a press conference held in Seoul, adding that four more hotels will open this year.

The announcement came as hotel chains have been waging tough competition in setting up more prestigious hotels in the country as short stays at five-star hotels in the downtown area have become increasingly popular among locals. 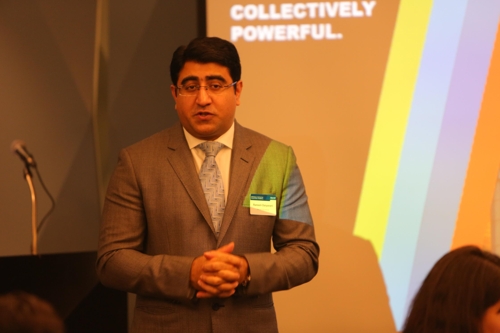 This photo provided by Marriott International Inc. shows its Vice President Ramesh Daryanani in charge of global sales in the Asia-Pacific region speaking during a press conference held in Seoul on July 14, 2017. (Yonhap)