(SEOUL=Yonhap News) South Korean shipyards are expected to clinch a decent number of new orders during the second half of the year, with a slew of contracts to be signed soon, industry sources said Saturday.

Earlier data showed that local shipyards clinched 2.83 million compensated gross tons, or 79 ships, in the January-June period, which represents a twofold increase from a year earlier.

Hyundai Heavy and its affiliates have secured a series of fresh contracts, with their new orders reaching US$4.2 billion for 72 ships in the first six months of the year.

Their first-half orders represent a whopping increase from a meager $1 billion and 13 vessels a year earlier.

In the January-June period, Samsung Heavy Industries Co., another local shipyard, won $4.8 billion worth of orders to build 13 ships, including two offshore plants.

Daewoo Shipbuilding & Marine Engineering Co., a troubled shipyard, clinched $770 million worth of new orders to build seven ships in the first half of the year.

In regards to future prospects, Hyundai Heavy is set to sign deals valued at a combined $2.7 billion soon.

Samsung Heavy is also likely to win a $1.5 billion deal to build 12 articulated tug barges. Samsung has already signed a letter of intent with SeaOne for the deal, which calls for the construction of the barges that will carry compressed gas. Details of the potential deal have not been disclosed.

If the deal goes smoothly, orders secured by Samsung Heavy will hit $6.2 billion this year, just shy of its annual goal of $6.5 billion.

Under the deal with Maran Tankers Management, a unit of Greece's largest shipper, Angelicoussis Shipping Group, the ships to be delivered are 318,000-ton types, but Daewoo did not reveal the value of the latest deal.

"There are signs that demand for bulk carriers and container ships are set to rise," said Kim Hong-kyun, an analyst at Dongbu Securities. "We also need to look at whether a rise in new building prices will continue down the road." 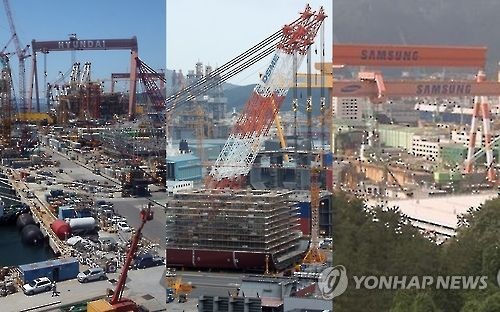