(SEOUL=Yonhap News) A team of South Korean scientists announced Monday it has developed a material that can be utilized to collect precious metals from sea water, which can help recycle industrial waste.

The team from Pohang University of Science and Technology (POSTECH) said the material, which took a cue from sea squirts, successfully collected 99 percent of gold liquefied in sea water, while filtering out chrome, which is considered a hazardous material. Sea squirts are categorized as "filter feeders," which consume food particles by filtering sea water. They are known to use a material called "tunichrome" to collect rare metals.

While tunichrome can be extracted from sea squirts, researchers have been facing trouble as it only exists in a small volume within sea squirts' blood.

The POSTECH team combined chitin and Gallic acid to make the new material that holds similar functions as tunichrome. Chitin is an abundant material that can be found in crustaceans such as shrimp and crabs. 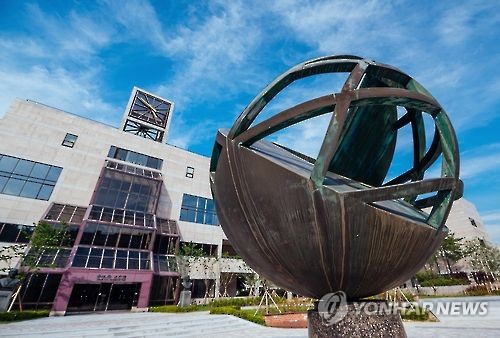 The campus of POSTECH, located in the country's southern east city of Pohang. (Yonhap)