"The strong annual upturn in sales is being driven almost entirely by fast-rising average selling prices (ASP)," industry tracker IC Insights said. "Prices for DRAM and NAND first began increasing in the second half of 2016 and continued with quarterly increases through the first half of 2017."

The researcher said the ASP of DRAM chips shot up 16.8 percent from the third quarter of 2016 to the second quarter of 2017. That of NAND flash memory also advanced 11.6 percent over the cited period.

"Even though DRAM ASP growth is forecast to slow in the second half of the year, the annual DRAM ASP growth rate is still forecast to be 63 percent," IC Insights said, hinting the figure marks the steepest annual rise since it started compiling such data in 1993.

Industry watchers said Samsung and SK hynix are expected to enjoy a sharp growth in operating profits following the increase.

IC Insights, however, said expanding facility investment in memories is likely to lead to a weaker price down the line.

"The likelihood of overshooting 3D NAND flash capacity over the next few years is very high," the researcher added. 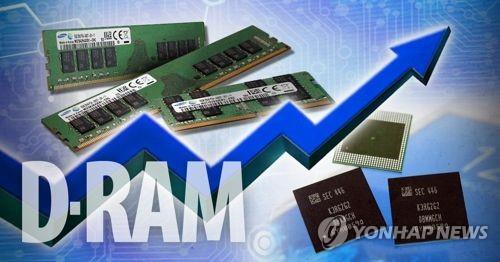