The State Affairs Planning Advisory Committee said the fourth industrial revolution, which calls for changing the industrial sector through the combination of various cyber and physical systems, can help create more jobs, develop cutting-edge technologies and eventually serve as a catalyst for the economy.

Such seismic changes can act as a boom for the country's industrial sector, whose productivity and employment could be bolstered by headway in such fields as cloud computing, Internet of Things (IoT), big data and artificial intelligence (AI), the committee said.

To facilitate the drive, the Moon administration plans to establish a "Fourth Industrial Revolution committee" chaired by the president in August to push forward positive change by forming a collaborative state-private sector partnership.

Among other things, the government will seek to make the country the first commercial user of fifth generation telecommunication technology, and provide full support for key technologies such as electric vehicles, self-driving cars, renewable energy, AI, 3-D printing, big data and industrial robots. Such assistance can play a part in revitalizing the economy.

Market watchers have said that the manufacturing-based Korean economy has an edge over many rivals in the digital revolution era given its prowess in information technology, good ICT infrastructure and high level of spending on research and development.

The new government wants a paradigm shift toward a more digitalized economy under which all industrial segments are merged for more efficient production and to lower the overall cost of goods made that can enhance competitiveness.

Experts have even said the northeast Asian nation could actually embrace "creative destruction" at this stage and heartily embrace new changes, thus building on the economic success it has seen over the last few decades.

In fact, South Korea has been already moving to incorporate the fourth industrial revolution into the economy.

Moon's economic policies largely boil down to generating more jobs, which he believes is the most important for sustainable economic growth.

The new chief executive claimed earlier that his government will increase investment in 10 major areas that include the fourth industrial revolution and the social services sector, which can stimulate more hiring.

Moon said earlier such investments would include creating 810,000 new jobs in the public sector during his five-year presidency, which he said would prompt the private sector to create 500,000 new jobs per year. 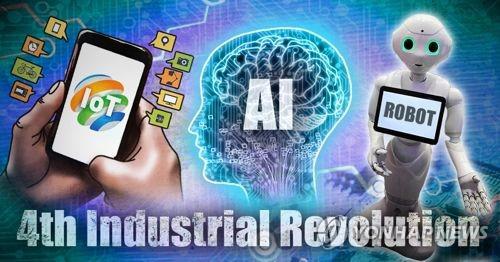