(JEONJU=Yonhap News) The smart agricultural valley being created in North Jeolla is expected to grow into a leading agro-industrial cluster of Asia. In particular, Seed Valley, the private seed research cluster that opened last year in Gimje-si, is pushing forward with the Golden Seed project, which aims to develop and export 'seeds more expensive than gold.'

Private companies, government agencies and universities will collaborate on this project to develop around twenty new seeds that bear crops for human and livestock consumption (e.g., rice, potatoes, corn, cabbages, peppers) and sell them overseas. The global seed market is estimated to be worth some KRW 80 trillion, while the seed market in Korea is thought to be on a KRW 1 trillion scale.

Some 20 companies, including Asia Seed, set to move into Seed Valley will be cultivated into global leaders that can compete with multi-national seed companies such as Monsanto and Syngenta in carrying out world-class research and exporting seeds. 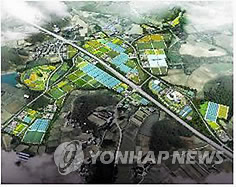 To better help the five clusters achieve their full potentials, the province has stepped forward to develop projects to supplement each cluster in their weakest areas, such as R&D, attracting tenant companies, cultivating human resources, or securing a foundation for providing business support services.

Upon completion of the Asia Smart Agro Life Valley, North Jeolla expects it to create around KRW 8.4 trillion in economic effects, some 50,000 jobs, and KRW 2.7 trillion in added value.

With Asia Smart Agro Life Valley, the key is in forming a strong connection to the vast Saemangeum district and Innocity Jeonbuk where R&D institutes in agriculture and life sciences are concentrated in, and in integrating the latest advances in information and communications technology (ICT).

"The fact that the Asia Smart Agro Life Valley was included in the new government's national roadmap means North Jeolla is being recognized for its prospects to lead the country's agricultural industry in the future," Choi Byeong-gwan, head of the province's planning and coordination office, noted, adding, "as it took over 10 years for the province to prepare for this project that aims to turn a field in which the region has secured a distinct competitive edge into a new growth engine, the new valley is also sure to help strengthen the competitiveness of the entire country."