(SEOUL=Yonhap News) South Korea's low-cost carriers (LCCs) posted a 51 percent on-year jump in the number of passengers they served on international routes in the January-May period as they took advantage of low fares and diversified routes, the transport ministry said Monday.

The number of local passengers who used the full-service carriers (FSCs) for overseas travel fell 5.4 percent year-over-year to 2.45 million in the first five months of 2017. In contrast, passengers who chose LCCs over FSCs on international routes soared to 1.50 million during the same period, according to the Ministry of Land, Infrastructure and Transportation.

"Budget carriers are expected to carry more passengers as they offer reasonable prices and are diversifying more mid and long-haul routes to woo customers," a ministry official said.

On domestic routes, nearly 60 percent of customers opted to use LCCs in the January-May period due mainly to competitive prices, he said. 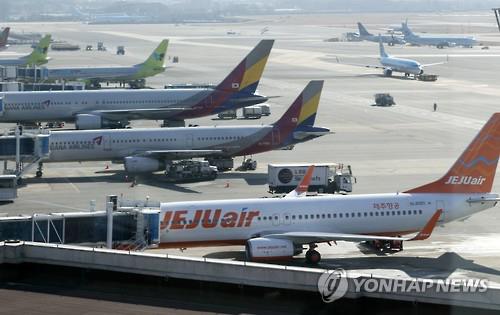