The South Korean government turned upbeat about the economy for this year and next, predicting annualized growth of 3.0 percent in 2017 and 2018 - the fastest since 3.3 percent in 2014 - on the back of improved global economy and aggressive fiscal spending.

In the revised economic policy outline announced on Tuesday, the government predicted a growth of 3.0 percent for 2017 - compared with 2.8 percent last year - and the same rate for 2018.

The Bank of Korea earlier this month also had upgraded the growth outlook for this year to 2.8 percent from previous 2.6 percent and suggested the economy could expand closer to 3.0 percent after supplementary budget spending.

The National Assembly recently passed the government’s proposal for extra budget of 11.03 trillion won ($9.9 billion). The government vowed to spend 178 trillion won over the next years to bolster growth, hiring and social security.

Inflation would hit 1.9 percent this year due to the supply end - higher oil and food prices - accelerated from 1.0 percent last year, and 1.8 percent in 2018 on improved consumption.

The current account surplus this year would fall to $72 billion from last year’s $98.7 billion as imports gain faster than exports from increased facility investment and further to $70.5 billion.

The economic growth in the second half would slow from the first half due to softening in exports and facility investment. The gross domestic product had grown at faster-than-expected pace of 1.1 percent in the first quarter.

The government will strengthen “aggressive role” of fiscal policy through increased fiscal spending and public-sector jobs, while the monetary policy would be kept “loose” to accommodate recovery against external risks of rising trade barriers and interest rates.

The government will shape trade policy to better respond to rapid changes on the external front and structure the economy toward innovation to stay ahead in the fourth industrial revolution. 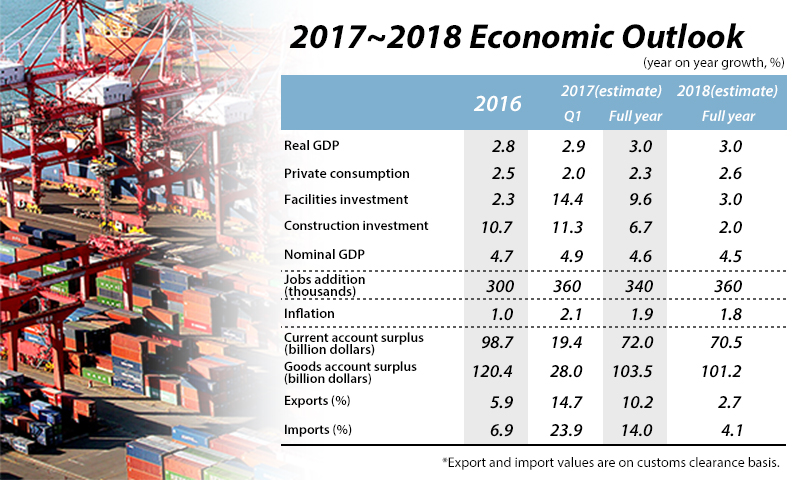