(SEOUL=Yonhap News) The Korea Pharmaceutical and Bio-Pharma Manufacturers Association (KPBMA) has decided to open an AI-based drug development support center within the association, seeing how artificial intelligence (AI), which has emerged as a core component of the fourth industrial revolution, has immense potential in enhancing the efficiency of the drug development process, thereby innovating the entire pharmaceutical industry.

The news was announced on July 24 by Bae Yeong-u, executive member of KPBMA's R&D policy committee, at a press conference held at the KPBMA headquarters in Seocho-gu, Seoul.

The purpose of the conference that day was to express the association's intent to join the Moon administration's core national strategy to spearhead the fourth industrial revolution. Recently the Korean government designated the biopharmaceutical industry as a new future-type industry that creates high added value.

Bae explained that "new drug development requires great lengths of time and large amounts of investment, and yet it is difficult to predict success with any degree of certainty," and emphasized, "the process begins with some five to ten thousand prospective substances that are finally narrowed down to one drug candidate, and AI technology can significantly raise the chances of success."

According to the association, it takes an average USD 2.4 billion (KRW 2.7 trillion) in R&D expenses to develop a single drug. Only five out of over five thousand prospective substances make it to the clinical trial stage, and of those five only one can receive final approval for commercialization.

But AI could vastly accelerate the time necessary to gather and analyze large amounts of data, and test it through all possibilities. Not only can AI optimize clinical trial procedures, but it can also help predict adverse side effects or clarify how the drug works. The time it takes to develop a new drug can be shortened by four to ten times, the association explains.

Bae noted, "Multi-national drug companies like Johnson & Johnson, Pfizer, and Merck have already started to apply AI technology in developing their drugs," adding, "in particular, successful application of AI is expected in the early stages of going through prospective substances which takes up 35 percent of the entire process."

He stressed that "to utilize AI, the Korean pharmaceutical industry has to build infrastructure that meets local demands, and cultivate human resources in related fields," adding, "the government also has to actively support efforts to make medical big data platforms more accessible to drug makers, and encourage the application of AI to new drug development."

For its part, KPBMA will open an AI-based drug development support center by the end of the year, and plans to form a task force that introduces AI and big data technology to pharmaceutical companies. The new center will work closely with the government on its big data initiative, and at the same time request for further industry-wide support.

At the press conference, the association also expressed its intent to build an innovative biomedical ecosystem that encourages more Korean drug companies to enter foreign markets. Other goals will include revitalizing investment in bio ventures, and attracting government funding for commercialization.

KPBMA Chairman Won Hee-mok said, "in the end what's most important is open innovation," adding, "we will work with AI and biomedical experts so that the Korean pharmaceutical industry remains at the forefront of the fourth industrial revolution." 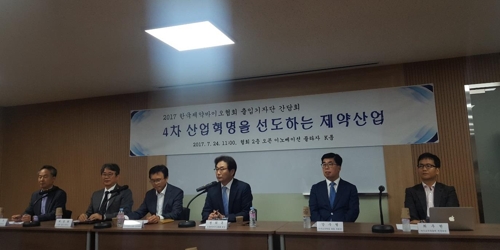