The park is located on the 1,320 square meters of land in the Songdo district of Incheon on the western outskirts of Seoul, according to the Ministry of Culture, Sports and Tourism and its subsidiary Korea Creative Content Agency (KCCA).

The Monster VR consists of four separate zones where visitors can watch VR videos and enjoy car-racing, bobsleigh, shooting, space travel, and a variety of other sports and leisure activities. It is operated by GPM, Vive Studio and Media Front, chosen in open bidding.

"Monster VR has richer content than VR-theme parks in foreign countries," a KCCA official said. "We hope it would serve as a foothold for leading VR content in the country to make a foray into foreign countries."

The culture ministry plans to establish similar facilities for offering first-hand experience of VR technology on the southern resort island of Jeju and in the southeastern tourist city of Gyeongju. 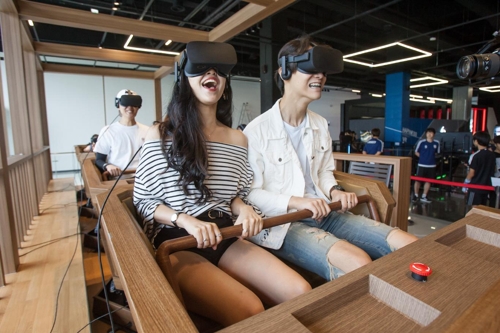