(SEOUL=Yonhap News) Exports of fishery products rose for the 15th month in a row last month helped by a sharp rise in shipments of laver, the Ministry of Oceans and Fisheries said Sunday.

Fishery product shipments reached US$210 million in July, up 6.3 percent from a year earlier.

Exports of fishery products have been on the rise since May last year.

Outbound shipments of fishery goods surged 11.1 percent on-year to $1.33 billion for the first seven months this year from $1.2 billion in the same period in 2016.

Laver replaced tuna as the biggest export item in July, with more than $60 million sold abroad, up 74.4 percent from the previous year.

The latest data showed exports of cuttlefish, however, shrank 62.5 percent on-year to $3.36 million last month due to a drastic cut in the catch.

Exports to China, meanwhile, declined 15.7 percent on-year to $32.6 million last month as the Beijing government has carried out economic retaliation against South Korean goods and services following Seoul's deployment of a U.S. missile defense system on its soil. 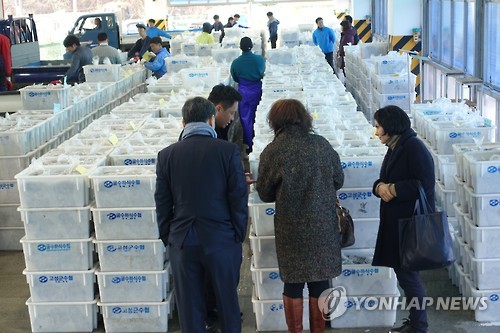