He also showed a strong will toward introducing a fundamental measure to protect the culture-arts scene from political interference through a committee launched last Monday to find truth with the former Park Geun-hye administration's blacklisting of artists deemed unfriendly to the government.

"We're going to organize a task force to correct unfair practices in the film market, including screen monopolies, and push for measures to create a fair business environment," Do said during an interview with Yonhap News Agency at the ministry's Seoul office Friday.

The ministry will cooperate with the Fair Trade Commission that has a far-reaching right to probe unfair trading practices to take swift measures, he said, indicating that all possible administrative measures should be taken before a relevant bill passes the National Assembly.

"It takes a long time to revise the law, so we'll continue discussions on the matter. But before that, the cultural administrative authority will make progress on its own," he said.

Big-budget films' screen monopoly and conglomerates' ownership of movie theaters and distributors have caused discord in the film industry for years. The issues resurfaced when the domestic historical blockbuster "The Battleship Island" opened on the largest-ever number of screens on July 26. The film invested and distributed by CJ Entertainment was shown on 2,027 screens, which is about 80 percent of the 2,758 screens available in the country. This marked the first time in the country that a movie has been released on more than 2,000 screens. The film, partly thanks to the overwhelmingly large number of screens allocated, has attracted an audience of more than 6 million.

When he was an opposition lawmaker last October, Do proposed a bill calling for banning conglomerates from running theater chains and distributors at the same time, and prohibiting them from monopolizing screens for films supported by them. The law is currently pending at the National Assembly.

"It is good for a movie to receive a lot of love from the people, but if they dominate (screens) like this, the rest of the films like art house and indie films lose their chance of being screened, so the diversity of the film industry is not guaranteed," Do said. "I think it's very important to create conditions for guaranteeing the diversity of films." 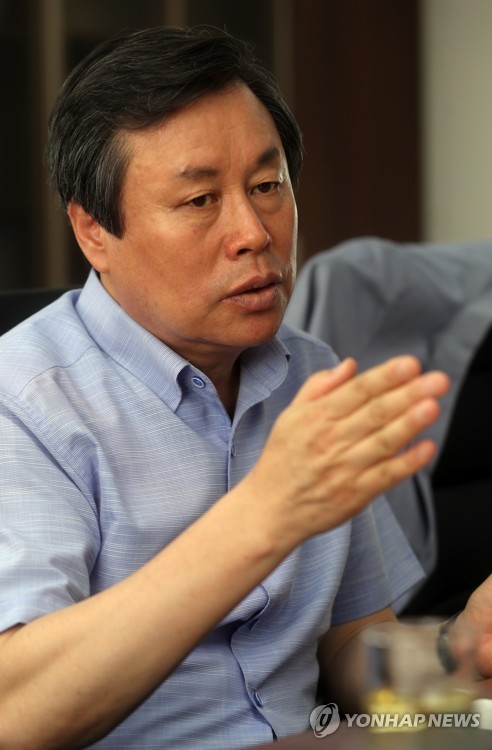 Do Jong-whan, minister of culture, sports and tourism, speaks during an interview with Yonhap News Agency in Seoul on Aug. 4, 2017. (Yonhap)

As for the blacklist issue, Do pledged to do all he can do to help the fact-finding committee heal wounds left in the minds of the blacklisted artists, as well as the society, and work out a fundamental measure to prevent any recurrence.

Listing anti-government artists and banning them from state financial support was one of the main things that sparked massive public protests and Park's impeachment last year. She was removed permanently by the Constitutional Court in March.

"I'll make sure nobody would be excluded from state support because of their ideological inclination," the minister said. "If necessary, I will make a new law," he said, unveiling his intent to accept a demand from artists to enact a law to prevent further blacklisting of culture-arts figures.

He showed an intent to punish those found in the investigation process to have violated the law.

"It will be necessary to take measures against anyone found directly responsible, in the process," he said.