(SEOUL=Yonhap News) With less than 200 days remaining before the start of the 2018 PyeongChang Winter Olympics, South Korea is going all-out to make the event a successful endeavor for the host country, with the economic benefits being at the forefront of things being keenly considered.

Earlier, Lee Hee-beom, the chief of the country's organizing committee for the sports event, estimated that the economic impact of hosting the Winter Olympics is expected to top 32 trillion won (US$28.2 billion) over the next decade by fueling infrastructure construction and the local tourism industry.

Some 390,000 foreigners and some 2.2 million locals are expected to visit the event's venues in Gangwon Province, a good chance to promote the country's beautiful mountains, scenic vistas and other tourism-related products, according to the organizing committee.

More specifically, PyeongChang's hosting of the winter games is forecast to lead to the direct production-inducing effect of just under 20.5 trillion won, or more than twice the economic benefits enjoyed by the 2002 FIFA World Cup, an earlier estimate by the state-run Korea Institute for Industrial Economics and Trade (KIET) claimed. 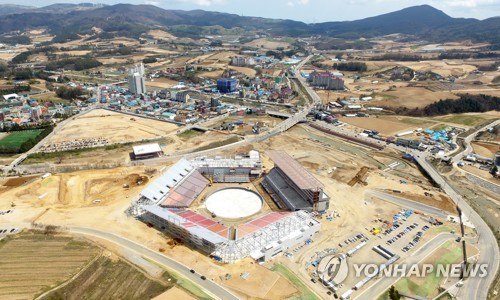 This is an aerial view of a stadium, dubbed "Olympic Plaza," under construction where the opening and closing ceremonies of the 2018 PyeongChang Winter Olympic Games will be held. The facility is scheduled to be completed by the end of August. (Yonhap)

The institute estimated that the sports event will translate into 8.7 trillion won in value-added benefits for the entire country, with 230,000 more jobs to be created. Gangwon Province, which is home to PyeongChang, is expected to experience a production gain of more than 11.6 trillion won.

KIET estimated that the construction, airline, lodging and hospitality industries will benefit the most.

The institute said that indirect benefits from hosting the Olympics will be good for the economy as a whole.

"The PyeongChang games will also help upgrade the country's image abroad that can help promote the brand image of local companies and products," the HRI said. "PyeongChang could boost overall tourism by over 32.2 trillion won in the next decade."

Data compiled by the organizing committee showed that a total of 2.8 trillion won has been allocated for the event, while some 2.5 trillion won in revenue is expected, which means that a shortfall of some 300 billion won should be covered. 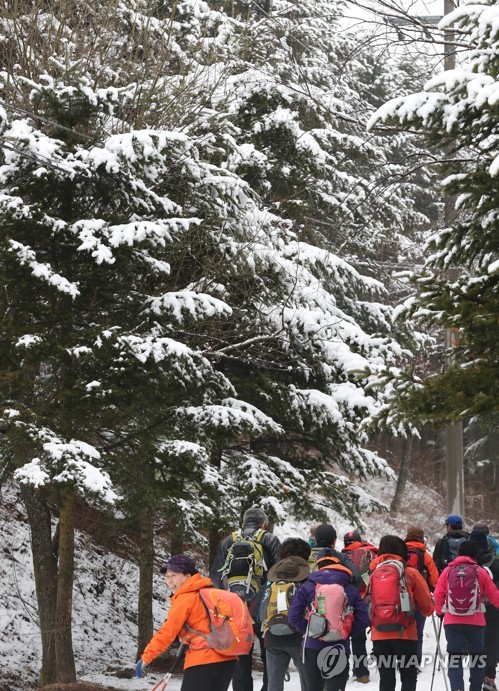 Hikers climb a snow-covered mountain in PyeongChang, some 180 kilometers east of Seoul, on April 1, 2017. (Yonhap)

According to unofficial data, some 3.7 trillion won on average was spent for each of the four previous Winter Olympic Games.

The committee has raised a total of 894 billion won so far this year in donations by developing various marketing programs to help fund the Winter Olympic Games, slightly short of its target of 940 billion won it hoped to secure through fundraising.

The chief of the organizing committee said earlier the committee would work to create more revenue in the tourism sector and encourage private investment by linking the games and its venues with local tourist attractions.

"We will provide never-before-seen IT-based tourist services where foreign visitors will be provided with tailored information about the games, its venues, tourist attractions and places to shop from the moment they arrive here until they leave," he said. "The PyeongChang Winter Olympic Games will create enormous economic benefits." 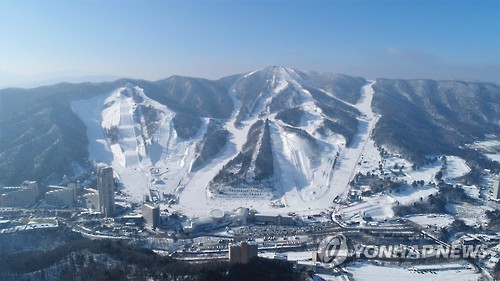 This photo, provided by the organizing committee for the 2018 PyeongChang Winter Olympics on Feb. 10, 2017, shows the Bokwang Snow Park for the international winter event in the alpine town, 182 kilometers east of Seoul. (Yonhap)

A model that South Korea can emulate can be the boom that the 1972 Olympics had on Sapporo.

The rural Japanese city was not well known before the games. But with the influx of tourists during the games, it has gained fame and currently holds various winter events that attract millions of people from all over the world.

Given this example, what's most important is how to generate economic benefits even after the games are concluded by utilizing tourism and sporting events.

"The various effects of hosting the Winter Games will be felt before and after the event for a long period of time," said an official at the organizing committee. "More concrete steps should be taken on how to use the facilities after the games are held."