As the domestic industry continues to suffer from market saturation, tougher regulations, and China's retaliation over the deployment of the THAAD missile defense system, retail companies here have been are looking for new ways to break through the present situation.

Upon its decision earlier this year to withdraw from China, E-Mart has been looking to make inroads into Southeast Asia through exports and direct market entry.

The retail chain is planning to open its second store in Ho Chi Minh City, securing Vietnam as a bridgehead for entering other markets in the region, including Laos, Indonesia and Cambodia.

E-Mart's first store in Mongolia, opened last July with two to three more on the way, is run on a business model that exports the E-Mart brand and approaches to management.

The company has also been focusing on increasing product exports, which had surged during the past three years, from KRW 300 million in 2013 to KRW 32 billion in 2016.

With a total of 14 exports markets--the Philippines, Japan, the United Kingdom and Taiwan new additions to the list--E-Mart hopes exports to reach KRW 53 billion this year, and KRW 100 billion in 2018.

Lotte Mart, another company hit hard by in China by the THAAD row, is also actively seeking to expand its presence in Southeast Asia.

In 2010, it started to export Lotte Ramyeon instant noodle products to Indonesia, and has been supplying private brand (PB) red pepper pastes and soy bean pastes to a Korean grocery store in Los Angeles, California, since 2011.

Other export destinations include China (onions) and Vietnam (onions and strawberries).

Lotte Mart plans to diversify its export destinations from the current six countries including the United States and Canada, to some thirty markets including Singapore and Taiwan, and expand its exports to include some 300 items.

Currently, the chain has 112 stores in China, 45 in Indonesia, 13 in Vietnam, and plans to open a new location in Lampung, Indonesia, by December 2017.

The Korean convenience store industry is also ramping up its overseas network.

GS Retail, operator of the GS25 convenience store chain, has signed with Vietnam's SonKim Group to establish a joint venture.

The first GS25 store is scheduled to open in Ho Chi Minh City, with GS Retail receiving royalties as the master franchise that owns a 30 percent share of the JV.

Earlier in October 2016, GS Retail opened the first GS Supermarket in Indonesia, marking the beginning of its entry into overseas markets.

Meanwhile, BGF Retail, operator of the CU convenience store chain, has recently announced its intent to enter the Iranian market.

The entry will be carried out in the form of a master franchise contract that minimizes the risk of business and investment, and instead enables a sustainable source of royalties, the company explained.

BGF Retail plans to use Iran as a foothold for expanding into other emerging markets in the Middle East and Southeast Asia on a full scale.

A retail industry source noted, "while the industry is currently suffering from stagnant consumption, slow growth and various regulations, it is now setting out to develop new markets overseas," adding, "because there is a significant risk in having to compete with local and global companies, many Korean firms today are opting to enter foreign markets in the form of franchise contracts or product exports." 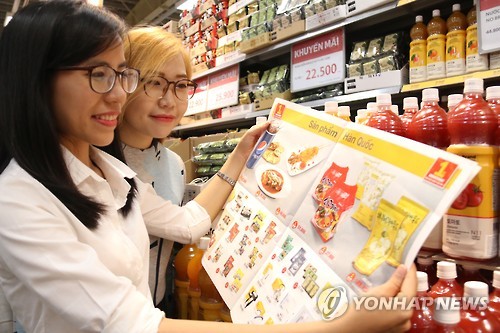