KFC to double outlets by 2023 and go aggressive in chicken-strong Korea
Date
2017.08.11
Views
1071
According to Pulse by Maeil Business News Korea,

KFC Korea Co., the local operation of American fried chicken brand KFC that was acquired by farming chemical conglomerate KG Group earlier this year, will more than double the number of outlets in South Korea over the next six years and enhance mobile services to raise more revenue in the local fast food market. The aggressive marketing plan comes as the fast food operator has not been able to get out of the red as of end of June.

Uhm Ik-soo, chief executive of KFC Korea, said in a press conference in central Seoul on Friday that the company will increase the number of eateries from the current 211 to 500 through aggressive innovation and additionally hire 1,000 regular workers by 2023. It will first add 200 more employees by the end of this year, he said.

The Korean operation of KFC, a unit under American fast food company Yum! Brands Inc., was acquired by KG Group in February. The latest press conference was held to share the company’s future business plans under the new owner.

KFC plans to apply technology owned by KG Group such as that of payment settlement and kiosk operation to its marketing. The fast food operator has already introduced a delivery-exclusive mobile application and early next month. It will launch a new online-to-offline (O2O) order service called Zinger Bell Order that allows consumers to make orders using their mobile application and make payment before collecting them at the nearest store without having to wait in queue. A similar service is currently being offered by Starbucks Korea.

KFC also plans to install more kiosks at stores across the country that allow consumers to more conveniently order and receive food. Currently, the automated service is being test operated at its outlet near Hongik University.

The company, meanwhile, said that it will continue to directly manage all 211 stores without granting franchise licenses. 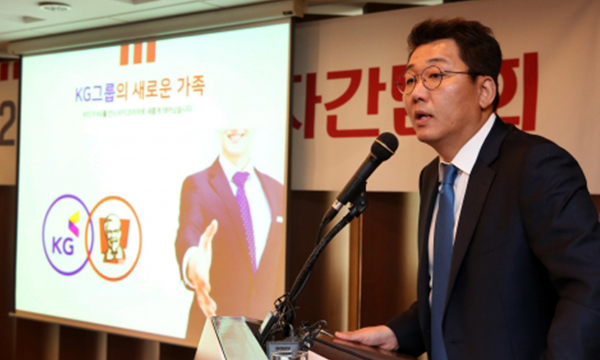