(SEOUL=Yonhap News) South Korea's top two carmakers said Tuesday that they have set up an advanced vehicle-road communication system as part of their broader plan to advance autonomous driving technology.

Hyundai Motor Co. and Kia Motors Corp. said they have incorporated the so-called vehicle to everything (V2X) system on a 14-kilometer stretch of road with seven intersections in Hwaseong, south of Seoul.

The companies said they will carry out detailed research to verify the validity, effectiveness and soundness of the system that will allow them to move forward with self-driving cars that are seen as the future of the transportation industry.

The V2X aims to make it possible for vehicles to exchange various information on a real-time basis with the road, signal lights, between other cars and even pedestrians. Such information is critical for autonomous cars since onboard cameras, radars and other sensors cannot provide a comprehensive picture of a car's surrounding that will allow it to navigate safely through streets. Sensors, in particular, have been found to have problems in bad weather conditions.

The advanced system makes use of special signal relay stations and closed circuit TVs placed along the road.

The two carmakers, flagship affiliates of the world's fifth-largest automotive conglomerate in terms of sales Hyundai Motor Group, said it reached an agreement with Hwaseong City late last year for the installation of the V2X. The city located some 60 kilometers from the capital city is home to Hyundai's Namyang R&D Center. The conglomerate has been engaged in a government-supported autonomous driving development program since June 2016.

Hyundai and Kia said they plan to gather information from the V2X by the end of the year so they can make changes and improve shortcomings detected.

It said based on data and know-how collected, it will get the system operational for the state organized infrastructure project that will make it feasible for cars to communicate with each other on highways in 2020. 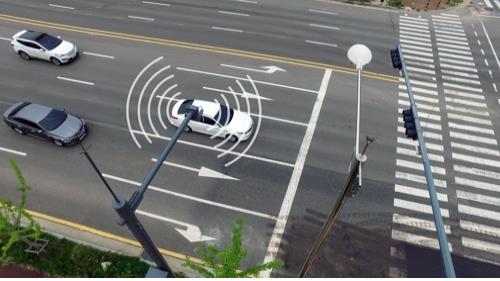