According to industry sources on Tuesday, supply of flexible copper clad laminates (FCCL) is getting tighter amid growing demand for rigid-flex printed circuit boards (RF-PCBs), a core part for an organic light-emitting diode (OLED) display panel, ahead of the launch of OLED phones by the world’s top two smartphone makers Samsung Electronics Co. and Apple Inc. later this year. FCCL is key material for RF-PCB and Doosan, LG Chem and SK Innovation are major Korean FCCL suppliers.

In the semiconductor segment, supply of wafers is also short. A wafer is a substrate where integrated circuits are printed. According to Semiconductor Equipment and Materials International (SEMI) association, worldwide wafer shipments in the second quarter ended June 30 this year jumped 10.1 percent compared to a year ago period. As demand exceeds supply, the wafer price is forecast to surge nearly 20 percent in the third quarter, according to market experts.

Some analysts predict the rising wafer price could make a dent in profitability of Samsung Electronics and SK Hynix, Korea’s and the world’s two largest memory chipmakers. But others argue that they are well prepared for the price hike as Samsung Electronics generally buys a bulk of wafers on long-term contracts and SK Hynix acquired some stakes in local wafer manufacturer LG Siltron from LG Group early this year.

The price of multi-layer ceramic capacitors (MLCC), which helps feeding electric power steadily to semiconductor chips, has been heading upwards, too. MLCC prices had stayed low since 2002, but they recently turned around. Currently, the global MLCC market is led by Japan-based Murata Manufacturing with a 40 percent share followed by Samsung Electro-Mechanics, affiliate of Samsung Electronics, with a 20 percent share. 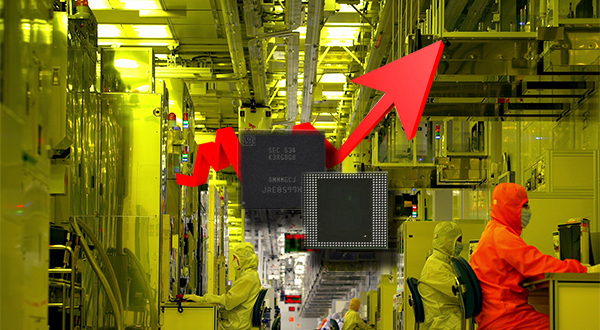