Shinsegae to open another all-in-one shopping complex near Seoul next week
Date
2017.08.17
Views
899

(SEOUL=Yonhap News) South Korean retail giant Shinsegae said Thursday it will open another shopping mall on the northern outskirts of Seoul next week, as it aims to revitalize its offline shopping channels in the face of tougher competition with online malls.

Startfield Goyang, a four-story building with two underground floors covering an area spanning 364,000 square meters in the city of the same name, will open Aug. 24, the retailer said.

"Our strongest competitor at the moment is online malls," said Lim Young-lock, chief of Shinsegae Property, the group's property development unit, during a press conference held at the mall. "We focused on bringing people out to our mall."

The new complex, third of its kind, is equipped with more than 560 brand shops, along with over 100 restaurants, as well as the group's warehouse-style supermarket E-Mart Traders and other places for leisure activities, including the water park Aquafield.

A weeklong pre-open event will start Thursday, the retailer said.

Shinsegae expects the new shopping complex to rack up 650 billion won (US$572 million) in sales in the first year.

In September 2016, Shinsegae opened the country's largest shopping theme park in Hanam, southeast of Seoul, which gathered more than 10 million visitors in the first five months after opening.

Shinsegae expects its three Starfields, including one in the Convention and Exhibition Center (COEX) in southern Seoul, to chalk up a combined 1.8 trillion won of revenue next year. 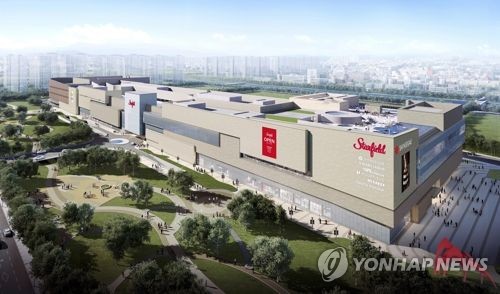 Shown is an artist's rendition of Shinsegae's all-in-one shopping theme park Starfield Goyang. The mall will open in the northern outskirts of Seoul on Aug. 24. (Yonhap)